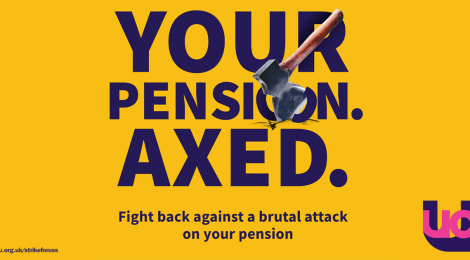 After several weeks of impressive and well-supported strike action in UK Universities over pensions, taken by a record number of members of the University and College Union, and with excellent student solidarity actions, a new negotiated proposal was put to a ballot (for background see earlier posts on our blog: http://afed.org.uk/solid-strike-action-in-higher-education-continues-over-pensions/ & https://www.ucu.org.uk/strikeforuss  ). In this blog by a member of UCU in the AF, we analyse the reasons for what looks like a poor result which will do little to remove uncertainty for workers about their future retirement income.

On 13th April 2018 it was announced that members of UCU had voted to accept the deal offered by employers (64% Yes with a 63.5% turnout), ending one of the largest ever university strikes which saw closures, cancelled lectures and disruption to research and administration across the country during  14 days of walk-outs over 4 weeks in late-February to mid-March. The deal that has been accepted offers no firm promises about future pensions, simply that nothing will change for 12 months while a panel of experts reviews the situation. This is problematic as the scope of this review has not been defined (will we be forced to accept the false assumptions constraining current valuations?) and the findings of the panel are only recommendations and are not binding. An earlier deal, which offered reduced pensions for three years while a review took place, was firmly rejected by rank-and-file members despite union management looking like they were in favour. Although the current deal is clearly better than this, many UCU members feel union management were too eager to end the strike given that no guarantees had been extracted from the employers.

Given that the deal essentially offers members very little, many both inside and out of the union have been asking why members accepted the deal. Here we cover some of the reasons heard at branch meetings.

1. Fear of losing public support. People felt an independent review appeared ‘reasonable’ and the public wouldn’t support the strike if we carried on, particularly as further strikes in exam periods might mean delayed graduation. Many felt the students (and their parents) backed us when it was a couple of missed lectures but not if the degree they just paid >£40k for didn’t turn up on time. Sadly, this feeds into the very real marketisation where students are treated, and act, like customers.

2. Sally Hunt, general secretary of UCU. Despite having no mandate to do so, Sally Hunt used the all members email lists to campaign to accept the deal. The no vote did not get access to these. For people who were undecided, having the general secretary say they didn’t think we could get any more concessions was a deciding point. With the strike over, she can now return to the normal business of her £200k job.

3. Fatigue. The strike took place over 14 days of bitter cold and snow. After handing out leaflets in the cold members received some pretty thin pay cheques and management emails telling them the fight was lost. The no vote was asking for people to sacrifice more for an uncertain outcome, the yes vote was asking people to go back to regular pay and the promise nothing would happen for at least a year.

4. Centrism/technocrats. Many felt the no vote had been hijacked by UCU Left/SWP and demanding more was some leftie attempt at bringing down the Tories (SWP members were actually discussing calling a general strike on the picket). Senior staff at some universities did not want to be seen as dogmatic, ‘left’ etc and were decidedly less radical than their more junior counterparts on low wages and precarious contracts. Sadly, this is part and parcel of organising in a union which represents everyone from admin staff on £12k to professors on upwards of £60k.

Many also refused to accept that this was part of a wider political problem, that it was just an oversight by management who didn’t realise the pensions valuation was flawed and so were acting in good faith. This line of thought brings us to the technocrats who stifled much debate by focussing exclusively on the numbers, rather than management decisions to prioritise executive pay and campus building over staff pay and pensions. Medium.com was full of economics professors making their own actuarial models, convinced if only UUK could see their shiny new model, it would be all sorted. There was no realisation that this was part of a wider issue of marketisation of education, attacks on pay/pensions and a wider attack on defined benefit pensions in the public sector. No matter what the models say, the bosses want to end collective pensions. Unfortunately, attempts to discuss this (at least at some universities) got you branded as a trouble maker.

5. The independent panel is sure to find in our favour! A very common argument from the technocrats and optimists of the union, despite the panel’s findings only being recommendations and not binding.

With no promises from employers, an expert panel which can’t enforce its recommendations whichever side it favours and management intent on attacking staff pay, it seems highly likely that UCU members will be out on strike in a years’ time. Hopefully without Sally Hunt in charge.

More in depth information and discussion about the dispute and its context can be read online here: https://medium.com/ussbriefs/