Browse: Home   /   Our politics and what a group actually does 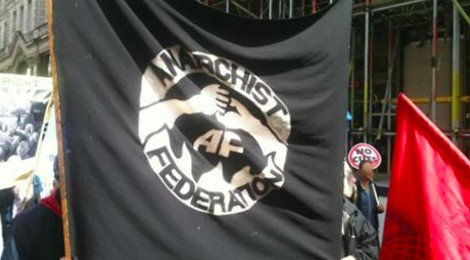 Our politics and what a group actually does

One of our London members was asked to introduce the Anarchist Federation some months ago at an open workshop. What follows are the expanded and edited notes derived from this event. It should be noted from the outset that while the AF has a high degree of tactical and theoretical unity we still allow for a healthy level of disagreement; as such this view is from the perspective of a single member and may differ from the outlook of other members or the collectively decided activities and politics of the Federation as a whole.

Political organising and engaging in struggles can be quite problematic and needs from the outset to be pragmatic. As anarchists and communists, in contrary to the leftist model of organising, we tend to join struggles as equals. So doing a talk on something that could be construed as a marketing pitch for the AF, put me off a little and possibly others as well.

Instead, I wanted to give an introduction to the basic underlining principles of anarchist communism and how I think it compels us to organise. In the course of that the role the AF undertakes, or sees that it undertakes, or at least should undertake would hopefully be apparent. I appreciate that some may not be new to anarchism, but the hope is to underline what we believe and where this logically takes.

One comrade giving an introduction at the Anarchist Bookfair some years ago, tried to present anarchism as a critique of power relations. I want to take it further than that and say that anarchism, and by which we mean anarchist communism, is an attempt at a revolutionary project for the realisation of a genuinely free society; free of the inequities of the market and the oppression of the state. It’s a body of ideas which we feel has something to offer and whose time may not yet have come. It holds within it important lessons from the past and ideas to take forward, without the same colossal setbacks endured by various strands of Marxism.

In the founding statement of the Anarchist Communist paper Freedom in 1886, it stated:

Anarchists work towards a society of mutual aid and voluntary co-operation. We reject all government and economic repression.

For sometime this was falsely attributed to Kropotkin and not Charlotte Wilson, but all the same, it’s a good place to start from. It’s unrepentantly beckoning a future communist society.

The assertion of the future society, or attempting to ‘build the new world in the shell of the old’ is a means and an end as we see it. In contrast to oppression, injustice, inequality and hierarchy, as anarchists, we struggle and invoke the potential of the new society. The premise being, our politics and struggles are intimately intertwined into the relations we’re developing with each other, or as German anarchist Gustav Landauer put it:

The State is a condition, a certain relationship between human beings, a mode of behaviour; we destroy it by contracting other relationships, by behaving differently toward one another.

When trying to isolate or pin-down the conception of anarchism we find some difficulty. There is no all encompassing manifesto or one founding father giving us our stone tablets that we have carried on unhindered. Its body of ideas are scattered across a number of theorists, organisations, a number of texts and historically encapsulated in events as diverse as the Spanish Civil War to the Paris Commune, and not just European events or events back in antiquity, we can see something of anarchy in the Arab Spring and more recently the resistance to racist police brutality and protests in immigration detention centres.

When we look at anarchism these core principles are at work:

When we come to embrace even a fraction of these ideas, we clearly become antagonistic to a society based on the rule of property and market forces, the political supremacy of the state etc. These ideas compel us into confronting basic everyday struggles like those forced on many of us at the moment in London, such as:

The struggles and potential success of our class requires a greater level of organisation than is currently apparent from the libertarian milieu. After being involved in anarchist politics for a number of years, anarchism, particularly in the capital remains as static and unable to meet important barometers of winning the decisive battle of ideas as ever. We need to insert our ideas into new arenas and put forward a movement building strategy.

These are important questions we need to address, collectively, which I feel even the most well intentioned affinity group or local collective will struggle with:

In an article no so long ago, Marxist David Harvey noted “I wouldn’t want my anarchist friends to be in charge of a nuclear power station”. Well, I believe he got it wrong. Anarchist organising with its eschewing of the dead-weight of centralism, hierarchy in favour of self-management and autonomy complements the logical requirements of vital services like aviation and nuclear safety. Very real crises posed today like the spread of contagious diseases and international conflict require responses that go way beyond the restricted framework of the nation state and parochialism.

As anarchists our response to this has to be greater and greater organisational capacity as a movement. There are spaces all over that we should be contesting, be it the power of the state, the market or the left. The AF organisationally is very modest, but we struggle for, along with others, for a stronger dynamic and militant anarchist movement grappling with some of these questions. To echo Bakunin, our role is very reminiscent of that of a midwife; to highlight dangers to our liberty, while getting involved in the day to day fights, be it housing or work-place issues, anti-fascism and anti-racism while helping the spread anarchist ideas.

This is why, contrary to the mass media perception, anarchism has to imply order, it’s the logical consequence of what we believe in. In the words of Errico Malatesta:

“Organisation, far from creating authority, is the only cure for it and the only means whereby each one of us will get used to taking an active and conscious part in the collective work, and cease being passive instruments in the hands of leaders.”

As anarchists we need to meet this challenge and we need organisationally to be dynamic and multi-faceted in our approach to the struggles ahead of us.

How does the AF attempt to undertake this?

To that end the AF regularly puts a lot of work into:

Editors note: If you want to discuss this piece with the author you can do so here.