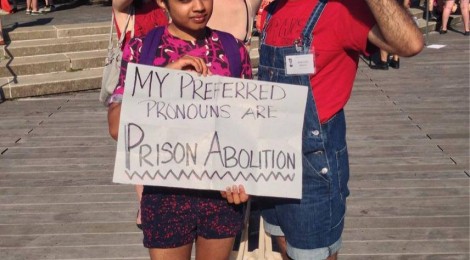 [Repost] Back to the streets

I love when the world makes things explicit: today when cisgender gays and lesbians and their allies will be celebrating gay marriage, a bunch of us will be on the streets for the Trans Day of Action march in NYC with Audre Lorde Project and the abolish the prison industrial complex party in the Bay Area with TGI Justice Project (TGIJP) protesting criminalization and murder of trans people. So many think pieces and neoliberal ‪#‎activists‬ will proclaim the end of the “gay movement,” but

Let’s get a few things straight:

1. Violence against queer and trans communities of color is steadily increasing. The majority of this violence is comes from the very state that allegedly supports our “equality” at the hands of the police, prisons, mental health institutions, and ICE. “Victories” like this Supreme Court ruling are often used to pinkwash the US government and make it seem “LGBT friendly” even though it’s one of the biggest arbiters of anti-queer and anti-trans violence at home and abroad.

2. Every time there is a symbolic ruling like this there is a significant backlash. This backlash looks like acts of physical and sexual violence against largely low-income gender non-conforming people of color who cannot afford privacy and safety. Policy change does not translate into changing hearts and minds. Community organizing does. Stop discussing progress without understanding punishment.

3. What you call a “rainbow,” we call the racial wealth divide. It’s much easier to affirm “gay love,” then it is to call for reparations for colonialism, slavery, and exploitation of labor. As gay marriage gets legalized the majority of LGBT donors are pulling back their funds to support queer and trans work. This leaves those of us doing racial and economic justice work even more broke and less able to get people out of prisons and into stable housing and jobs. But who needs money for bread when you can eat wedding cake?

Back to the streets.