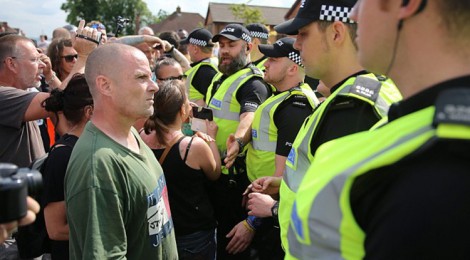 Outrage is being felt today in Nottingham after a man recovering from cancer had his home and possessions stolen by a gang of police and bailiffs.

Tom Crawford has been in dispute with Bradford and Bingley over his mortgage. Both in July 2014 and January of this year Tom was shown solidarity, as more than 300 people gathered on the quiet street in Nottingham to prevent the eviction. These acts of resistance went off without any issues and the bailiffs went home empty-handed

The same could not be said today, as somewhere between 50-100 police waited until Tom was taking his dying dog to the vet to attack his home. Flanking the bailiffs convoy, the police violently forced their way through anyone giving objection, before the doors were smashed down without proper warrant or identification.

As ever, none of the actions of the police or bailiffs followed anything resembling the law, showing in clear detail that the role of police is to seize and protect private property for capitalist ventures and the state.

Tom has vowed to fight on, pledging that his home will be his once more.

Footage can be seen on the ITV News site.