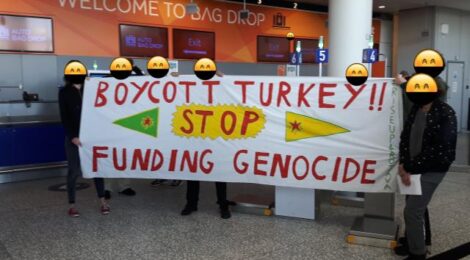 As Turkish State continues its bloody incursion into northern Syria/Rojava, and following in the wake of last week’s demos (see link: Bristol Rises Up for Rojava), members of Bristol Anarchist Federation took part in two Kurdish solidarity demos on the afternoon of Saturday 19th October in Bristol.

The first was a 50-strong picket of the TUI travel agents in Broadmead in Bristol centre. The demo was co-ordinated by Bristol Kurdish Solidarity Network. As previously noted, the tourist industry is one of the primary economic contributors to the Turkish military, with many operators owned by the same holding companies that own the arms firms, and share directors linked with Turkish President Erdoğan himself. For the three hours of the demo, as we distributed literature on the timeline of Kurdish resistance, displayed banners, broadcast continued speeches, and spoke with passers-by, next to no customers went through the doors. At the same time, 10 activists also picketed the Easy Jet check-in at Bristol Airport.

For more than 15 years, the Kurdish people and their supporters have been conducting a living experiment in democratic confederalism in the former Kurdish territories, which were carved up by the Allies in the wake of WWI and handed off to the new states of Turkey, Syria, Iraq, and Iran. Especially when considered alongside the greater recent shift towards right-wing religious extremism in the Middle East, the Kurds and their embrace of democratic decision-making, feminism, LGBT+ rights, and environmentalism, comes as a breath of fresh air; although these experiments are in no way anarchism, it’s definitely a move in the right direction. But for Erdoğan and his fascist dreams of a new Turkish, Neo-Ottoman empire, this empire must be built upon the bones of the Kurds and their dangerous ideologies, as well as upon those of the anarchists, revolutionaries, Armenians, and other ethnic minorities that still remain inside Turkeys borders.

The recent so-called ‘ceasefire’ between Turkish State and the Kurds & SDF (Syrian Democratic Forces), was undermined within hours of its signing on Friday 18th October, as Turkish shells and Jihadi mercenaries continued their attacks upon the hospital in Ras al-Ayn/Serêkaniyê.

Just two in a series of worldwide solidarity actions, it is hoped that, in combination with other tactics, hitting tourism targets will contribute enough pressure to make the the Turkish State’s planned ethnic cleansing too costly to continue. These demos also serve the purpose of inspiring hope in our comrades present in the region, as demonstrated in the following (quoted from the press release of the airport picket): “It is hard to describe quite how powerful it is for us on the ground here to see the photos and videos of your actions and demonstrations across the country, across the rest of Europe and the rest of the World.”

In unrelated news, after the Broadmead picket wound up, activists had the dubious pleasure of encountering an evangelist anti-abortion demo, just round the corner. They had taken it upon themselves to harangue Bristol shoppers every Saturday, about how the anti-choicers value the lives of unborn children, more than they do the lives of the adults who should feel pressurised to give birth to them. But after being drowned out by a one-hour impromptu street party and sound system dance-off, having their placards of pseudo-science and mangled fetus graphics blocked by our banners or stolen, and a furious crowd laying verbally into them, the misogynists soon fucked off home.

Update:
We returned to TUI again a week later for a much rainier, and rather smaller picket [these things may have been connected -ed]. Once again we had good interactions with folks passing by, and few kept their plans to venture inside – though a couple of people were oddly fanatical about their loyalty to a travel agent! This is the third time the store has been targetted, and it won’t be the last as long as they continue to help fund the Turkish State.
Once again the evangelist anti-choice activists were back. This time in higher numbers, with go-pros strapped to their chest and a much bigger and sturdier banner (6′ x 6′ in a metal frame). It’s clear Bristol’s anarchists and other feminists will have to work to create a solid counter to this US style evangelical misogyny.