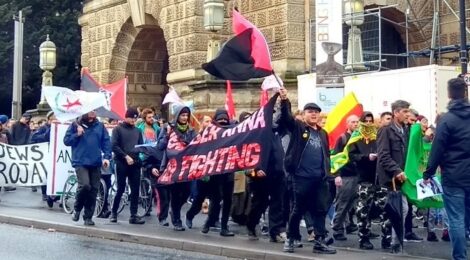 Bristol Rises Up for Rojava

On Sunday 13th October members of Bristol Anarchist Federation joined with between 200 and 300 others, to demonstrate against the Turkish State’s invasion of Rojava, and their continued actions of terrorism and genocide. The demonstration was organised by Bristol Kurdish Solidarity Network and others who joined them at an emergency meeting on Friday . It was a slow start at around 1pm, stood in the drizzle outside the BBC Broadcasting House on Whiteladies Road. The location was chosen to coincide with the national demo taking place the same time outside Broadcast House in London. Many were appalled by the BBC’s blinkered coverage and refusal to examine the Turkish State’s atrocities, refusing to call the invasion and planned genocide anything other than an ‘offensive’.

Things soon picked up, as more and more people began to arrive. Alongside BKSN and Bristolian Kurdani, there were folks from Bristol Green Anticapitalist Front, Plan C, Acorn, the usual mix of anarchos, antifascists, peace activists and lefties, as well as a local jewish group. Bristol anarchists perhaps have a particularly strong affiliation to the Kurdish cause – it’s less than two years ago now that a Turkish airstrike took away one of our own; transforming Anna Campbell/Hêlîn Qereçox from a living militant and friend to many of us, into a symbolic martyr, known by many more. “Anna is with us” will remain on both banners and gratified epitaphs the city wide, for a long time to come.

Half an hour in, buoyed by the increasing numbers we took the road, before making our way towards the centre. Although there were efforts to allow through some of the backlog of buses, it was inevitable that motorists would grate at their interrupted journeys, and at least one vehicle made a show of mock-ramming the crowd; but then, other vehicles sounded out their support for us, too. Bristol police continued their recent habit of being almost absent from protests, with just a couple of PCSOs following along.

As we continued down the hill, our numbers grew further, and ours was a loud, angry presence – most of the chants were led by the Kurdani present, largely in Kurdish languages. The demo halted frequently for impromptu speeches on the sound system – about the antifascist resistance in Kurdistan, practically the only outpost throughout the Middle East fighting for democracy, ecology, and women’s liberation; about the British State’s empty gestures and hypocrisy, denouncing the UK arms trade for arming Erdogan’s terrorists, even when other European powers (such as Denmark, France, Germany, Holland, and Norway) have made their moves to cut off the Turkish weapons supply; reflections about how global witnesses shouldn’t just bemoan the deaths of the innocent women and children in the region, but those of the innocent men, too, who deserve execution just as little; but principally, the speakers called on the population as a whole, that we mustn’t just passively lie back and watch the Turkish State erase the Kurds from the map.

These demonstrations are not just a protest against the Turkish government, and our own governments failure to hold it to account. They are an important message of solidarity to those struggling for survival against the Turkish state in Rojava, and across Turkey itself. Whilst we know from sad experience back in 2003, that a government hell bent on war cannot be dissuaded by protest alone, there is still hope that we can help to halt the invasion that is being bravely fought by those on the ground. This is in part due to the fact that many of Turkey’s international allies (and suppliers of military hardware) are not enthusiastic supporters of their actions, and can be pushed into placing pressure upon Erdogan. Secondly, because we can apply our own direct pressure, in the forms of actions against Turkish companies, tourism, and the Brritish based companies who back their military and government. Moving the campaign in the UK beyond just protest and moral boosting.

In the spirit of the moving beyond protest, after speeches had wound down in the centre, a small group headed to TUI to take action against its continued complicity with Turkish tourism. The shop was shut down completely. Turkish tourism is an important target for actions, as many operators in Turkey’s tourism industry are owned by the same holding companies that own arms companies, and include directors linked with Erdogan himself. This, coupled with the action earlier in the week that saw activists lock-on to block access to Bristol arms companies, show just two of the ways we can help from the UK, along with sending our solidarity (and our money!).

Get organised, get active, and Riseup4rojava