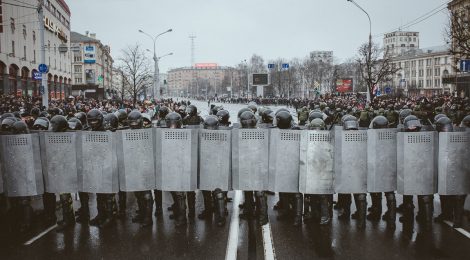 In Britain, over successive governments, we have been introduced to various forms of work-for-benefits, starting in recent memory with the Conservativeâ€™s ‘Project Work’ and Labourâ€™s ‘New Deal for the Unemployed’ at the end of the 1990s and various schemes since. In Germany the ‘ein-euro-job’ was another state initiative to punish the unemployed by forcing them to take successive low-paid compulsory jobs with the illusion that one of these might turn into stable employment.

A couple of years ago, another European state, Belarus, under its despotic leader Alexander Lukashenko, went one stage further by introducing the idea of a ‘social parasite’ tax, where an unemployed person has to pay an annual fee for not-working, or risk detention or other sanctions. The Presidential Decree #3 (2015) “decree against social parasites” imposed this unemployment tax on people who work (according to official record) fewer than 183 days a year and so do not take part in the “financing of the state”. The tax is the equivalent of US$250.

Now in 2017 people have taken to the streets against repression at a large scale in response to two particularly nasty developments. First, the suggestion to include ‘housewives’ with children under 7 years old if they are at nursery. Second, 470,000 unemployment tax notices were sent out in January, including to people working abroad, with a deadline of February 20 to pay or face arrest, forced labour, withdrawal of driving license or permission to work abroad. Perhaps not surprisingly non-payment however was close to 90%. Remember the Poll Tax?

The first protest march this year in the capital Minsk on 17th February was followed by similar massive protests and gatherings all across Belarus against the tax, and there was a growing feeling that it might even be possible to overthrow Lukashenko. The protests against the decree and discontent with the current regime has not been taken up by the official opposition and it is clear that people previously not involved in politics have been self-organising together. Anarchists have been strongly involved in the protests in some areas of the country.

State response to the protests has been intense. A big march was planned for Saturday 25th March in Minsk, including anarchists from different groups who made a call-out to join the demonstration. This resulted in mass pre-emptive arrests of anarchists and others. 113 (including around 30 anarchists) people were put in prison for 12-15 days and around 17 were kept in custody charged with preparing and training to organize mass riots (mostly nationalists and some liberals). The 25th May demonstration resulted in the biggest police mobilisation in years bringing thousands of riot cops to Minsk, detaining hundreds of people before and during the demonstration. According to a Belarus ABC article, “This Saturday, the capital of Belarus looked like a war zone created by the police.”

Belarus Anarchist Black Cross is gathering funds to help those arrested (lawyers, food parcels and if possible some money to help people get back on feet after being detained).

You can transfer money to Belarus ABC in various ways, as follows:

Belarus ABC (including details of appeal for donations): https://abc-belarus.org/?p=7540&lang=en