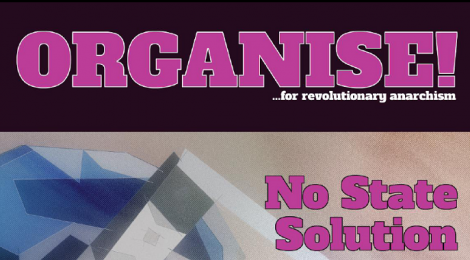 The Winter 2016 issue of Organise!, the AF’s 30th anniversary issue # 87, was out at the London Anarchist bookfair in October 2016. Contents and editorial are below. Download Organise! 87 for free. Buy online from Active Distribution and AK Press and at many radical bookshops and social centres. Alternatively get in touch here and arrange to obtain a copy directly (price for this with packing and postage is £3.50 for UK orders, £4 within EU or £4.50 rest of the world).

The Brexit vote has ushered in a period of increased instability and turmoil, aggravating the problems we already had: low wages, poor working conditions and job insecurity, high rents, social cleansing and homelessness, racism and xenophobia. Politicians are unable to deal with any of this, desperately trying to gain credibility as they struggle with each other for power. But most people have no real confidence in any of them, including the people’s ‘saviour’ Jeremy Corbyn. As anarchists, we know that the problem lies beyond individual politicians and their policies; the root of the problem is based in the nature of the State itself.

The State’s role is to support capitalism and will never willingly do anything that goes against the interests of capital. It cannot be captured or reformed. Instead, we believe that the only hope is to build a mass working class movement of people who not only resist the attacks, but create alternative structures that are based on self-organisation and a vision of a completely different society.

This issue of Organise! covers a variety of different topics but underlying them all is the idea that our fightback must come from our own efforts and that the State is actually an obstacle to social change. We look at key anniversaries: the General Strike, the Spanish Revolution and the Hungarian uprising. In each the State played a negative role. In the articles on Brexit, we argue that we don’t want the EU State nor the British state. We also show the alternatives to the nation state. We highlight the role of the police as an arm of the State and show how people are fighting back against police repression. The review in this issue deals with the debate between anarchists and Marxists, on whether you can capture the State or not.

In addition, we report on the 10th Congress of our international – the International of Anarchist Federations – and publish articles from our sister federation in Italy on Brexit and from Greece on the State.

Finally, we mark our own anniversary – 30 years of the Anarchist Federation.