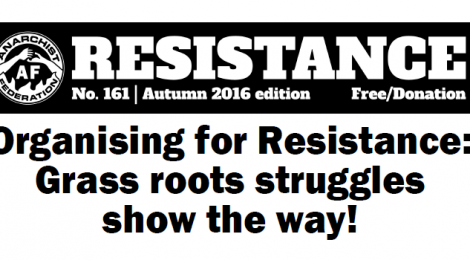 Download the latest 12 page issue of Resistance #161 Autumn 2016. Also read the contents and editorial below.

What with Brexit, Tory backstabbing, a new Prime Minister, Corbyn being elected Labour leader (again!) and a US presidential election it seems the pantomime of parliament has never been livelier! In our opinion far too much attention has already been paid to the political manoeuvring of our so-called leaders, across untold pages of papers and websites. We’ve spelled out our own position very clearly in previous copies of Resistance, and recommend you pick up those if you want to see yet more pictures of politicians. For this issue we instead put the focus where it belongs, on grass roots struggle – on the strikes, occupations and protests that are winning real change for workers across the UK and beyond. It is these actions that win real concessions for ordinary people. The politicians only ever play catch up. If they’re offering us something good, it’s usually only out of fear we’re going to take something better if they don’t! If, like us, you don’t trust any political party further than you can throw it, these pages should serve as a how-to guide for causing trouble and scoring victories by standing together rather than looking to the higher power of parliament.