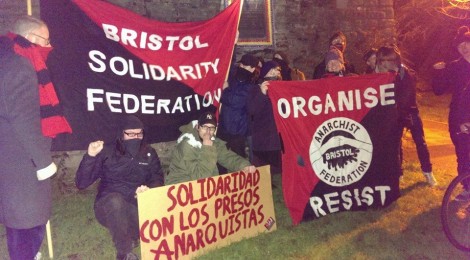 Federalism (in anarchism) is a mode of organisation where different individuals and groups form horizontal networks on the basis of offering solidarity and mutual aid in shared endeavours. Rather than having a top-down leadership, council, or centralised committee, a federation will employ a method of collective decision making that gives all parts of the organisation fair and equal input on decisions that are being made.

Membership of a federation is undertaken on the basis of free association. This means that potential members would be fully informed of the organisation’s structure and direction in advance of agreeing to join. Once part of the federation the new member could be involved in any decision making through some form of participatory direct democracy.

When it isn’t practical or necessary for every individual to attend a discussion, smaller groups within a federation can select a delegate to carry their views on a particular issue. Delegates do not have the power to make decision on their own, only relay the position(s) as they have been advised and to make changes as their mandate allows. Any points of deviation or debate have to be taken back to be ratified by the group as a whole. The federation may also select officers to undertake certain tasks, however they would only be able to act within the mandate given to them by the federation.

The delegate and officer roles are subject to rotation so as to share workload and responsibility. If an officer/delegate is felt to have gone out-with their mandate or acted in bad faith then mechanisms are in place to recall their position and review any actions undertaken.

The aims, principles, activity and structure of a federation are collectively developed and voluntarily accepted by it’s members. At the same time a federal structure allows for members to act as they want and remain part of the federation as long as they are not undermining its collectively agreed activities. While decisions won’t always go someone’s way, that’s just part of being around other people. The big difference when compared with hierarchal structures is that each member would have fair input into the decisions being made.

If a member has a fundamental conflict with the federation then free association allows for them leave. Due to the level of collective agreement in the decision making this is unlikely to take place on a whim. Members would also have accepted the mechanisms by which the federation could come to a decision to disassociate (as in remove the membership) from a person or group.

Federalism and free association are important in all areas of class struggle. Without them our struggles will be isolated, thus unable to overcome capitalism and lead to a free communist society. Also, if our struggles were to take on a hierarchal form then a hierarchal class system will be part of any outcome. Class society can not be ended, or communism reached, by putting a different group in charge.

There are two examples of anarchist federations in the UK; ourselves in the aptly named Anarchist Federation (with our pamphlets ‘The Role of the Revolutionary Organisation’ and ‘Basic Bakunin’ both touching on this subject), and the Solidarity Federation (a revolutionary union initiative). Both federation’s websites have great about sections that detail how they organise, so are worth checking if you want a more practical example of how these ideas are put into practice.

Tags: afed, Federation, Free Association, SolFed, Theory
← [Repost] ABC Belarus on the release of the prisoners and the upcoming elections
They say cutback, we say… what? →
Posting....
Skip to content