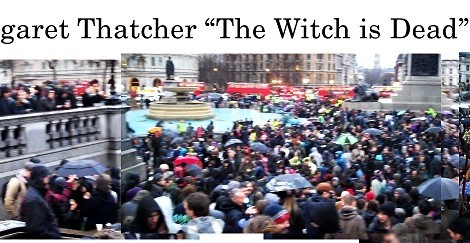 The following begins the editorial in the forthcoming issue of Organise! magazine issue no. 80 Summer 2013 which will be in print very soon.

Margaret Thatcher politely died just in time for us to commemorate her life appropriately, in the 80th issue of Organise! We will speak ill of the dead, and go to press in the hope that the celebrations that began on Monday 8th carry on, showing the extent of contempt for Thatcher throughout the British working class.

The world we now live in is more dangerous, corrupt, unequal, oppressive and impoverished because of her particular legacy. From the start of her leadership in 1979, she turned up the heat internationally to put Britain ‘back on the map’. She built up its military capability in the 1980s and established Britain’s place in the Cold War, so that a generation grew up in fear of a nuclear conflict with the USSR. In 1982,  by ‘defending’ the Falklands with immense firepower (which included the notorious sinking of the Belgrano), she heralded in an era in which Britain has gone to war at the drop of a hat. She supported the Apartheid regime in South Africa, was best pals with the Chilean dictator general Pinochet and was hated not least in Northern Ireland, where working class people were brutalised and murdered under the divide-and-conquer approach to domestic dissent. Her racist policies supported the rise of the far-right in Britain, and black and white youth were forced to fight the police in the riots of 1980 onwards (especially 1981): an explosion of anger at what inner-city life had become. She passed the first anti-gay legislation for 100 years, known as ‘Clause 28’. In economic and industrial terms, key focal points of working class militancy were attacked in ways that were openly divisive and smashed much confidence in our class. The Miners, who struck in 1984-5, were tragically defeated, as were the Wapping print-workers in 1986 (Murdoch, please die soon as well).

These battles were not, of course, lost without a fight and hugely important acts of bravery and inspiring solidarity. But the only major working class victory in the Thatcher period was the struggle against the Poll Tax. This ideological class-based attack took place in the context of the dismantling and destroying things traditionally understood as social property: the major industries, public services, jobs and welfare. The abolition of the Poll Tax was announced in 1991. The power of opposition to the tax in Scotland since 1987 had quickly spread to England and Wales by amazing feats of working class solidarity, organisation and a willingness to take to the streets and fight. The Poll Tax riot of 1990 and smaller, but very serious, local disturbances were not organised by anarchists, as the state, the press and some left parties claimed (as though we could pull that off!), but neither did they come out of nowhere. In fact, for a time, it seemed that the working class could win.

This is not to suggest that things were great before Thatcher; ‘old’ Labour was an example of how not to share out common resources. And afterwards, ‘New’ Labour set about completing her legacy with their Thatcherite-Labourism, paving the way for the current cabinet’s unrelenting attacks on our class. As anarchists we clearly understand, and all this demonstrates, there is no hope except in a class-based revolutionary solution. But whilst all politicians are the enemy of the working class, some do more damage to us than others, and rightly we rejoice in the demise of those we have most to despise.

If it seems strange to some people that others would happily dance on the grave of a long-senile old lady, it’s because we are still her victims, after all this time. And though her death doesn’t alter the challenges we face, even small boosts in our confidence at this point in the class struggle are vital. If there is some sense of closure about the past as a result of giving her a raucous and disrespectful send off, we have to shake off the hangover and use these couple of weeks as an opportunity to talk to our workmates, friends, family, everybody about new beginnings and new possibilities. But first, let’s Party!