Browse: Home   /   Coronavirus and emergency: we don’t forget which side of the barricade we are on – statement by FAI Italy 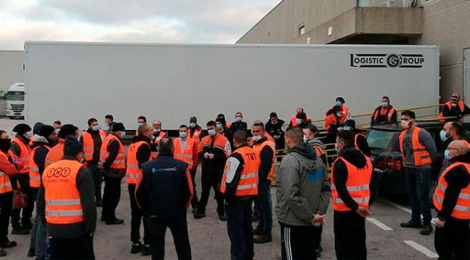 Coronavirus and emergency: we don’t forget which side of the barricade we are on – statement by FAI Italy

W / 26/03/2020 / Comments Off on Coronavirus and emergency: we don’t forget which side of the barricade we are on – statement by FAI Italy / Analysis, News

The following article was written about one week ago by our comrades in the Italian Anarchist Federation (Federazione Anarchica Italiana) and translated by them (original in Italian). Much of this will ring true for those of us living in the UK or elsewhere in Europe. We are seeing some differences, notably the strikes of factory, construction and other workers over the neglect of their safety by bosses, whereas many of these same workers are casualised or self-employed and not unionised in UK. And prisoners are rioting. But the deadly effect of an minimally funded health system under neoliberal policies is a clear warning for those of in countries who are catching up with Italy on the exponential spreading of illness. The British media, in its unquestioning support for the military can only talk of the selflessness of the army who are now drawn in to deliver goods for the NHS, more for propaganda than anything. By linking the lack of resources during this outbreak to militarism, the FAI are showing the importance of the broader critique of heavily militarized states which may seem to sit in the background out of mind, when not engaged in expensive and bloody wars, but which can easily be called into action for internal repression too.

In the face of this crisis, state and capital are showing, with unprecedented evidence, all their enormous limitations and their structural inability to take into account people’s needs and health.

In Italy, the political choices of governments have constantly cut public health (more than public, state). Part of the few resources have been diverted to private healthcare, even during the current emergency. The contemporary “regionalization”, according to a corporate-capitalist model, has then made this service (which in theory should be universal) strongly differentiated between regions and regions, between rich and poor regions.

Patients have become clients and care services monetized within a general framework of competition and profit.

This approach to the health service reveals its true face at this dramatic moment, leaving us all at the mercy of its philosophy, which is certainly not that of human piety and the recognition of the other as our fellow human beings, but that of calculating the minimum material requirements for maximum profit, which now translates into the lack of equipped facilities, the lack of hired staff, the lack of consumables goods in warehouses.

The result is that the increasingly limited funds and increasingly reduced staff, already exploited to the limit in the ordinary, leave no margin for emergency situations. Except then to admit that the places in intensive care are running out, the staff is scarce, the respirators are not there and it will be necessary to make choices on who to treat, because is not possible to treat everyone. And all this when the State pays 70 million euros a day for military expenses. With the 70 million spent in just one of the 366 days of this leap year, six new hospitals could be built and equipped and there would be some money left over for masks, analysis laboratories and swabs for real screening. A respirator costs 4,000 thousand euros, so you could buy 17,500 respirators a day, many more than you need now.

In recent weeks we have witnessed a total quackery of the political class in dealing with the emergency, with exponents from all political parties who have said everything and the opposite of everything, calling for closure and opening depending on what the opponent was calling for. We have seen the government appeal against the closure of schools by the Marche regional administration and then close the whole country a few days later, we have seen repugnant opportunisms and now we are witnessing the rhetoric of “we will make it”.

If we do it, it will certainly not be thanks to national and regional governments. It will certainly not be thanks to the massive militarization of cities and borders. It will certainly not be thanks to the companies that, through Confindustria (association of industrial employers), have thrown down the mask by explicitly choosing profit. They have stated it clearly and distinctly, without lapses of words, without shame: let us not close down, production must go ahead. This has led to spontaneous strikes in many companies, with the big union centers chasing the struggles of workers who did not want to succumb to employers’ claims. The pursuit of the regime unions has reached the goal of the ridiculous protocol signed on March 14, containing only obligations for workers and only recommendations for companies.

This disgusting cynicism, this hunger for profit combined with contempt for the health of those who work, precisely because expressed at such an exceptional time, must not pass, and they must be held accountable.

This crisis is being paid for, above all, by those who work in health care and are under constant pressure from gruelling shifts and increasing cases of contagion and deaths among the staff themselves.

No mainstream media has taken up the complaint of the lawyers of the nurses’ association, an institution that has nothing subversive about it. In the dominant narrative nurses and nurses are described as heroes, as long as they get sick and die in silence, without telling what happens in hospitals. Nurses who tell the truth are threatened with dismissal. Those who are infected are not recognised as having a workplace accident, so that the hospital company is not obliged to pay compensation to those who find themselves working every day without protection or with totally inadequate protection.

This crisis is being paid for by those who have an occasional or precarious job, currently without income and without any certainty of getting their jobs back after the epidemic has ended.

It is being paid for by those who find themselves at home in telework having to reconcile an often very complex home presence with children or people to look after and contemporary productive obligations.

It is being paid for by those who are forced to go to their workplace without any guarantee of health.

Those who are poor, homeless, those who survive on the street or in a nomad camp are paying for it.

Workers are paying for it. Workers went on spontaneous strikes against the risk of contagion and were reported by the police for violating government edicts because they were demonstrating on the streets for their health.

The prisoners of the democratic state are paying for it. Prisoners have given rise to riots in 30 prisons in defense of their own health. During the riots there were fourteen dead. Fourteen people who – they tell us – would all have died from an overdose from self-induced drugs. Fourteen people subjected to the responsibility of a system to which perhaps it did not seem true to be able to apply other containment measures with an iron fist, not so much of the infection but of the prisoners themselves.

In an explosive situation due to the already unworthy conditions that have been living inside prisons for years – in a structural and not exceptional way – the government has thought well to stop all visits without taking effective measures to protect the health of the prisoners.

Unfortunately, we are well aware that once this emergency phase is over, it will always be the same people who will lose out in terms of impoverishment and further exploitation. Because even if none of us have the crystal ball, it can already be predicted that they will use the excuse of “recovery”, “economic recovery”, “overcoming the crisis”, to increasingly compress the spaces for struggle in the workplace and civil and political freedoms. It will not be a surprise if the rhetoric of “responsibility” will be used to further refine the disciplinary and social control mechanisms, to further restrict freedom of movement, to further restrict the freedom to strike and demonstrate, which is now in fact suspended. Already now the number of those reported for violation of the decrees exceeds that of those infected. On this we will be called upon to proactively monitor and act without hesitation.

We will not forget who is responsible for what happens today: governments and states have sacrificed the health of us all by choosing profit, war and strengthening their power.

Governments and states must not delude themselves: the struggles will not go into quarantine.