Browse: Home   /   When the water is safer than the land 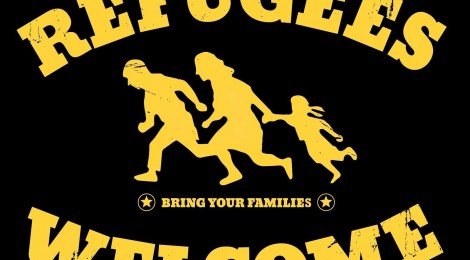 When the water is safer than the land

Do you remember the Icelandic volcano, Eyjafjallajökull, which erupted in 2010? It threw a cloud of ash up into the air that resulted in planes being grounded worldwide for safety reasons. Do you remember how British tourists stranded on the European mainland were left to fend for themselves and had to pay smugglers to transport them across the Channel in dangerous, ricketty boats crowded with far more people than can possibly be safe? Me neither, because that would be fucking ridiculous. But it seems that if you substitute the Channel for the Meditaranean and instead of British tourists facing the horrors of two more days in Barcelona, it’s Syrians fleeing a civil war that has torn their lives apart or Eritreans fleeing a military dictatorship, this is a perfectly acceptable situation to a depressingly large section of our society.

A week ago, I read about the anti-refugee riots in Germany.1 These are not protests, these are fucking pogroms, organised violence and persecution against ethnic minorities. And that pissed me off. Then on Saturday I saw some pictures going around social media, pictures of dead children. These were kids who were coming mostly from Syria to Europe by boat, their boat capsized and many of the passengers drowned. At least one of these kids was still in nappies, and that made me fucking furious.

According to the BBC, 2,500 people have drowned in the Mediterranean this year so far trying to reach Europe out of around 300,000 who’ve tried to make the trip.2 That’s 1 death for every 120 human fucking beings committing the high crime of trying to travel from the Middle East and Africa to Europe.

The Atlantic recently quoted the poem Home by Warsan Shire in relation to the refugee crisis – “No one puts their child in a boat unless the water is safer than the land.”3 Which is very true, and it got me wondering whether people realise exactly what the dangers on the land are. Two of the largest sources of refugees crossing the Mediterranean are Syria and Eritrea.

Syria has been in the grip of a civil war since 2011, when protests against the Baathist dictator Bashar al-Assad turned into an armed uprising. There are at least four major factions fighting in Syria, the government forces (the Syrian army), the opposition forces (the Free Syrian Army), the Islamic State and the Rojava forces (the YPG). Before the civil war, Syria had a population of almost 22 million.4 Now it has a population of around 18 million.5

The Syrian Observatory For Human Rights has reported that 310,000 people have been killed since the beginning of the war, around 1 in 70 of Syria’s pre-Civil War population. This includes over 3,000 executions by the Islamic State6, who kill people by shooting, beheading, stoning and being thrown from a height for “crimes” ranging from not being heterosexual (“sodomy”) and being a woman who has sex outside of marriage (“adultery”) through to “sorcery” and “insulting God.” And it’s not just the Islamic State, a UN investigation found evidence of “systematic torture and deaths of detainees” in Syrian government prisons from 2011-2013, with 11,000 people being “systematically killed” in jail.7 There is evidence of a great deal of abuse and brutality against Syrian people from all directions. Over a third of Syria’s pre-civil war population have been displaced from their homes (7.6 million people), this includes the nearly a fifth of Syrians (4 million people) who have been forced to flee the country altogether.

Eritrea is perhaps less well known in the popular consciousness than Syria, much of the following information is taken from Wikipedia. The State of Eritrea, in the Horn of Africa, has had a pretty turbulent history. Formed out of the Scramble for Africa as “Italian Eritrea” in the late 19th century, it changed hands from fascist Italy to the British Empire during the second world war before eventually being ceded to Ethiopia. After the 30 year Eritrean War for Independence, Eritrea became a nation state in its own right. Since the Eritrean People’s Liberation Front (EPLF) took power in 1993, all political groups besides the ruling People’s Front for Democracy and Justice (PFDJ) are banned.8

Eritrea is a one-party state. A military dictatorship which a June 2015 UNHRC report accused of crimes against humanity “on a scope and scale seldom witnessed elsewhere”, including extrajudicial executions, torture and forced labour. Young people are conscripted into the army and can be trapped in national service indefinitely and the government operates a shoot to kill policy on anybody trying to “escape” the country.9 This is a country where people live in constant terror of authority, where torture and imprisonment are used with impunity to punish any who speak out.

So it’s pretty clear why the people currently fleeing war and persecution across the Mediterranean are willing to take pretty some terrifying risks. The refugee crisis is driven by people fleeing some of the worst situations in the world. Earlier I made reference to British tourists being “rescued” by the Navy after they were stranded in Europe by the Icelandic volcano. It’s a sign of sickening inhumanity that in the face of all this appalling suffering, the British state is talking not about providing refugees safe passage to Europe, but bombing the boats that bring them here, while sections of the press hector the government to be more anti-immigrant. For the people trying to cross the Mediterranean, the water really is safer than the land and our government is trying to make the water more dangerous.