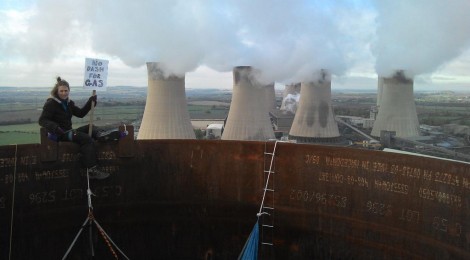 In order for the world to meet the IPCC’s 2oC target for maximum warming, two-thirds of global fossil fuel reserves must be left in the ground. Valuations of oil and gas companies are based on burning all of these reserves so limiting this will burst the carbon bubble of current stock market prices. The oil and gas industry accounts for around 5% of the global economy and anyone who pays into a workplace pension will indirectly own shares in these companies. Nearly every industry is reliant on the artificially cheap energy they provide. This is an important point as it is not just individual companies that can be targeted by the divestment movement – the entire economy is dependent on cheap energy.

Fossil fuels are cheap because carbon dioxide (CO2) is a negative externality; that is, the cost of emitting it, namely the threat of global environmental change, is not borne by the companies responsible but by society at large. Private companies, therefore, have little incentive to reduce CO2 emissions and the costs of their products are kept artificially low by this societal subsidy. In this sense, the issue of carbon emissions leading to climate change is one of the failures of the capitalist system as these emissions have no market value – they add nothing to the cost of a product and yet have huge ramifications for the global climate.

The fossil fuel divestment campaign seeks to put pressure on companies and governments to act by making CO2 emissions the next item on the responsible capitalism agenda. The movement can’t raise the cost of capital for the oil and gas industry or influence it in any direct way so is instead hoping that a swell of divestment will demonstrate public support for government legislation and global agreements on CO2 reductions. Negotiations between states are an interesting example of game theory – one where it is in the interests of all parties to stop emitting CO2 but there will be negative consequences for the first to act as they will be at an economic disadvantage compared to those who remain in a fossil fuel economy for longer. Although interesting as a textbook example to theorise over, the outcome of this game will affect the lives of billions and disproportionately hit those in the developing world.

Governments have been slow to put a price on emitting carbon that would significantly affect the fossil fuel industry. This is due to a mixture of neo-liberal ideas of minimal state intervention, a well-funded misinformation campaign and lobbying effort by the main polluters, geopolitical concerns whereby the main superpowers do not want to risk losing economic strength relative to one another, and the fact that many states themselves own vast fossil fuel reserves or large parts of their economy are dependent on them. This last point is particularly relevant given that 70% of oil reserves are owned by states or nationalised state companies (e.g. Saudi Arabia, Iran, Norway, Qatar) so that the main targets of divestment, such as Shell and BP, are actually relatively small players in the field.

In the current capitalist system where economic actors compete against each other for limited resources there is no place for environmental concerns. The owners of fossil fuel reserves are incentivised to produce as much as possible before any potential legislation curbs this activity and to try their hardest to limit or delay any such legislation. No thought is given to the system as a whole while individuals fight to enrich themselves – the system in question can be economic, as systemic risk was ignored in the run up to the 2007 financial crisis, or ecological, as is currently happening with CO2, over-fishing and depletion of groundwater resources. This is where the divestment movement fails in its aims – it cannot succeed in constraining fossil fuel use without addressing both the huge reserves in state hands and the system which allows a wealthy elite to control environmental and economic policy for its own gain.

Calls for green capitalism are flawed; they would rely on the same economic, political and social systems of power that are currently in place and would therefore simply perpetuate a series of further environmental crises. Changing the fuel that capitalism is propelled by will do nothing to change the system of environmental exploitation for private gain which has led us to the current state of affairs. No more than one third of fossil fuel reserves may be burnt if we are to meet the IPCC target but the oil and gas industry still invests billions every year in finding new resources. They know this is not compatible with an outcome that provides a climate and ecosystem that future generations can live sustainably from. They know this but are choosing their fiduciary responsibility to create a return on investment for shareholders over the environment. Profit is triumphing over people at every board meeting as plans are laid for further exploration. The inherent stupidity of the system is laid bare when capitalists are investing in their own planet’s destruction and lobbying governments to be allowed to compound the problem.

The divestment movement has had some success and there are lessons to be learnt from its campaigns. It has re-invigorated campus activism: thousands of people worldwide have signed petitions, held sit-ins and chained themselves to buildings for the cause. It has also made many people aware of how interconnected the global capitalist system is: the pension they pay into invests in oil, arms and child labour and therefore escaping tacit endorsement of those industries is difficult. Campaigners have done this by firstly having a clearly defined goal which seems achievable when compared to the complexity of the global climatic system. Secondly, they have made it easy for affiliated campaigns to spring up independent of any central organisation – this has been done through a downloadable toolkit which provides information, resources and suggested strategies for public engagement, protest and actions. Finally, they have managed to create guilt surrounding inaction. Often when campaigns encourage supporters to join them they are met with indifference. This campaign has been successful in changing the terms of debate so that indifference becomes support of the status quo, a continuation of university and pension funds supporting the fossil fuel industry. This has been a significant factor in gaining the support of the general student body rather than just a few activists.

Despite these positives the divestment movement is itself backing a system of exploitation and oppression of which one of the outcomes has been anthropogenic climate change. Without tackling the capitalist system the cause of ruthless exploitation of people and the environment remains and we are doomed to stumble from one ecological crisis to the next. All the movement aims to achieve is to ensure that the next ecological crisis will be powered by cleaner energy. In this sense the divestment movement is distracting time and effort from more effective and more radical forms of protest. Action is desperately needed that tackles both the immediate problem and the root causes of environmental exploitation.