Browse: Home   /   University workers keeping strong in the face of attacks on many fronts 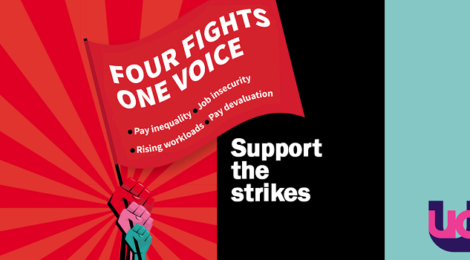 W / 12/03/2020 / Comments Off on University workers keeping strong in the face of attacks on many fronts / Analysis, News

Just at the time that Coronavirus has officially reached pandemic proportions, a good period of strike action of University and College Union (UCU) members is about to end in UK universities. Lecturers, researchers and admin workers in over 70 higher education institutions are completing 14 days of unpaid strike action over four weeks in February and March 2020. The action was taken against attacks on pensions and about ‘Four fights’ concerning pay stagnation, precarious contracts, increasing workloads and severe inequalities including the gender pay gap.

The context to the action is the ever-increasing marketisation of higher education which is now very dependent on high student fees, compared to centrally awarded funding, putting universities into competition for students and increasing their numbers.  This marketisation also goes alongside finance capital being used more regularly for expansion such as new buildings and infrastructure that universities hope will impress potential students and increase their competitiveness in general. All this is coming at the expense of workers because the universities are trying to make them teach this larger number of students with less staff and so the work stress of teachers in particular has greatly increased. In addition, rounds of assessment exercises such as the Teaching Excellence Framework (TEF) and the research equivalent, REF, have put pressure on individuals to work harder whilst university bureaucracy has expanded to ‘game’ the various national ‘league tables’ that have resulted from institutions being forced to compete. The idea of the state that allowed an increase in student fees of up to £9000 a year, so that universities would then compete on the price of their teaching, backfired as each university decided their reputation would be damaged by charging less than another. As a result university income is very sensitive to student demands to be better treated as consumers who want a good experience for the huge debts they will leave university with. University bosses have also attempted to save on direct staffing costs by restructuring admin and technical support with internal centralisation and outsourcing.

Workers already took action in 2018 over pensions and then in 2019 members were balloted on both pensions and the 4 fights. The pensions aspect of the struggle was particularly important as the scheme depends on university bosses acting in a cooperative way. Losing the fight to reach national agreement on pensions could mean the beginning of renewed attacks on nationally agreed pay agreements as well. The 2018 strike was successful in preventing the university scheme being downgraded to ‘defined contributions’, which involved union branches going against the union leadership. In the end there was agreement on an independent valuation. Unfortunately though, the managers of the pension scheme have responded to the situation by continuing to increase the percentage of contributions from workers which is now close to 10% of earnings.

The union leadership has since changed and is more combatative and is not willing to accept a solution that does not address all of the demands. So, the current wave of strikes has seen an escalation in the number of days of strike. Now the February/March strike has also ended without a solution, another ballot and further action is likely in 2020-21.

The success of the future action will require members to stay strong in the face of unwillingness of employers to move their position. However, the current strike has been greatly helped by the support from students who have seen through the attempts of bosses to blame the strike on workers. Students seem more aware than ever of the reasons for workers needing to strike. This attitude has been helped in turn by the knowledge of huge incomes and bonuses being received by university Vice Chancellors. Action taken by students has included supporting workers on picket lines and occupying university buildings. Public support has also been good during the current strike, judging from the honking from car horns at picket lines. This could result in part from the realisation that with the present government we should expect an attack on wages and living conditions to continue, in spite of all the Brexit promises.

The coronavirus outbreak will no doubt put further pressure on workers. As it stands, it has been difficult during the strike for workers to stop activities such as ‘open days’ for visiting potential student s and parents which take place at weekends outside of the striking period. Because of the virus these events are now reluctantly being cancelled on health grounds. At the time of writing it seems likely that some universities will have to close to stop the spread of the illness. This may give some opportunity for workers to think about the next part of the struggle. On the other hand, working from home may mean redesigning teaching to be delivered online which will be a lot of extra work and universities could try to use this later to break strikes. For this reason the union has been wary of the move to video recording of lectures. If this issue is forced by coronavirus, it will be important not to let bosses abuse this in the future.