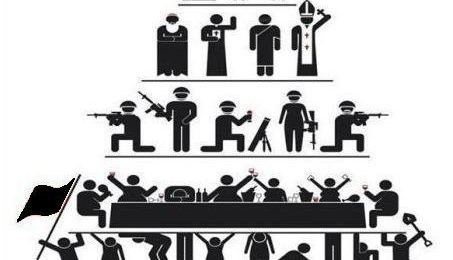 A Reply to Theresa May’s Statement

There is no ONE humanity
There is the humanity made up of classes:
slaves and masters

Theresa May has issued a statement calling for unity within the United Kingdom.

What unity do we have in a country where the number of rough sleepers is on the increase, as are the food banks, where many working class communities have been devastated throughout Britain, from the Welsh valleys, to northern England and the inner cities? What unity do we have in cities where the working class is being socially cleansed, where people like Patrik Schumacher can know openly talk about wiping out social housing and privatising all public space.

There can be no unity with those who exploit and oppress us, the working class, and who openly despise us.
We talk about a different unity. We talk about unity and solidarity with the striking railworkers, postal workers, cleaners, airline workers who have shown that the working class is still there.
We grow their food, we mine their minerals, we serve them in restaurants and hotels, we provide their health care we run their transport systems. When they are ill, infirm, or old we provide for their health. We produce everything, yet we allow a small group of parasites to live off our labour.

The answer to this is not the false unity of May and her chums in high places, but a class unity where we recognise our practical strength; where we can stop the wheels of industry and sabotage their attempts at increasing oppression and at the drive to war, where we can swarm out into the streets in vast numbers and paralyse their system, where we can look to a future not based on continuing inequality, oppression and exploitation but to one based on freedom, peace and equality, where there will be no more poverty, no more war, where we collectively run society and share equally in all products and the fruits of the earth.