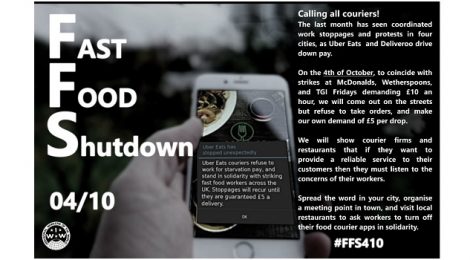 The following article is from an AF member and UberEats delivery rider (also called driver) who took part in the recent spontaneous industrial action in London following the decision of Uber to reduce massively the pay rates per ‘drop’ for food deliveries on 19th September 2018. This action has become necessary to fight a race to the bottom for food courier wages, all while the business owners are using the profits to support buy-outs and consolidation of the industry overall. The serious response from workers is to organise more effectively and coordinate at a national level, with a strike now planned for 4th October. The planned action on this day coincides with a national strike of the fast food industry. Furthermore, Uber taxi drivers are poised to show solidarity.

“Working as a delivery driver for UberEats is not easy. You have to pay for your fuel, insurance, motorbike or moped repairs, and even pay for the Uber bags and jackets you wear. If we try to save money on insurance, then we aren’t covered for some accidents, meaning not working for days after. Every time we get on our motorbikes, we are risking our lives. When it’s snowing or raining, it’s nice and convenient to have food delivered to your door. It’s so practical. But remember that there is a driver who has to face those conditions, and we don’t do it for fun, we do it for the pay.”

“Of all the precarious jobs around, UberEats was the one that paid the most. In London, drivers got anywhere from £5 to £7 per delivery. The ‘base payment’ was £5.33 per delivery, less 20% Uber fee; so the minimum a driver would get per delivery was £4.26. However, often you get a ‘boost’, when Uber multiplies the payment to 1.1x (that is, 10% more) or even up to 1.5x (50% more). Uber adds these boosts when they need more drivers, usually at peak times or during bad weather.”

“On Wednesday 19th of September, Uber cut down the base payment to £3.50 taking the minimum down to £2.60 after Uber cut is taken out. There was even one case of a driver who received £2.22 for a delivery, as you can see in the picture (mobile phone screenshots below). It’s getting much harder to live in London. Rent is going up and up. The vast majority of the drivers in London are migrant workers and living as an immigrant is especially hard. In most cases you have to pay the rent every two weeks. There is no stability and it’s constant work. You can make a lot, but you spend a lot, just to pay for the basics. For some drivers it is even harder, because they rent their Uber account from someone else, who charges for this.”

“After the ‘drop’ pay reduction, it’s been impossible to keep working while receiving so little – we ain’t slaves. On that Wednesday, chaos started to spread, and many drivers went on strike. On the following day, there were pickets in many places and the idea of protesting in front of the Uber main office, in Aldgate, was being spread. About 300 drivers went there, not counting all the others picketing elsewhere. After a few hours, the police said that it was not legal to stay there any longer, so the drivers went on a convoy to the Parliament square, which generated a lot of traffic disruption. The protest hit the news because of this.”

“The strike and that protest were spontaneous. There were many WhatsApp groups, divided into nationalities and areas, but there was no coordination, so, it was quite chaotic. On the next day, Friday, only 50 drivers went to protest in front of Uber main office. By the evening, all pickets were gone. On Saturday, everyone was already back to work, angry and frustrated.”

“Since then, Uber has maintained boosts to at least 1.3x (30% more than the new base), so the drivers are not suffering as much as they did on the Wednesday and Thursday. But it is still less than before. What really scares the drivers is that we know that Uber can drop boosts at any time, and we know Uber will do it in a few weeks. It will be impossible to work if there is no boost.”

“What is outrageous is that Uber has no reason to cut pay, other than pure greed. UberEats just announced that started negotiations to buy Deliveroo for £1.5 billion. If UberEats wasn’t profiteering from the drivers, it would not be in a condition to buy Deliveroo. For the drivers, this means that there is no way out. Deliveroo already used to pay less than Uber, before the payment cut. But, now, most likely working for Deliveroo will result in the same outrageous small amount that Uber is now forcing on the drivers.”

“On the 19th, 20th and 21st, the strikes were disorganised. Many drivers didn’t join. The main complaint from the drivers was that there was no one to represent them, no one to talk to the press, bearing in mind that most drivers don’t speak English very well. So they felt weak. However, from the weekend after, some drivers and activists started to organise. The Industrial Workers of the World took the lead and is now organising a national strike of couriers on the 4th of October! The IWW’s form of syndicalism allows it to work with non-members, similar also to how the Solidarity Federation does it, and has become the public face of the action. The requirement to become a member makes sense for unions, but we still need more modern ways to deal with spontaneous strikes. If a union needs to take weeks to vote, then it cannot support the drivers in such a crucial moment. In fact, the IWGB already organises couriers in London but was not able to support the drivers at short notice, although many IWGB members are helping to organise the strike on the 4th, which was put forward by the IWW.”

“Most of the organisation is still done through WhatsApp, but now things are better organised. It isn’t just a bunch of loose groups. There is a connection between all of them, even at the national level. The strike now is not only of UberEat drivers, but also of Deliveroo drivers. The amounts that these two companies pay to the drivers vary from city to city, so the specific demands may vary. In London, the UberEats drivers will demand £5 minimum per delivery, after Uber 20% fee, plus £1 per extra mile. There will now be strikes in Glasgow, Cardiff, Plymouth, Bristol, Newcastle and London, and rallies in many other cities. The choice to strike on the 4th October is because some McDonald’s, Wetherspoons and TGI Fridays workers are also going on strike, demanding a salary of £10 per hour, organised by the Bakers Food and Allied Workers Union (BFAWU).”

“We know Uber won’t be defeated so easily, and further actions will be necessary. But this seems to be promising. It has taken a lot of work to organise the strike on the 4th. Drivers are organising by themselves, and together with true activists. Some people spend too much time and energy worshipping Corbyn. I haven’t seen anyone from Momentum on the streets helping us to organise the drivers. If we are successful, certainly other organisations might try to claim they were responsible for it. But the drivers know that this national strike is only becoming a reality because of the hard work done by IWW, members of IWGB (in London), and unaligned activists.”

“The strike will be this Thursday, on 4th of October. We’ll strike from 5pm to 9pm. In London, at 5:30pm, the drivers will protest in front of the Uber main office, in Aldagte. For more information, including details on the actions in each city, access IWW website: https://iww.org.uk/news/iww-couriers-network-why-we-strike/

Read another article about UberEats action on libcom.org 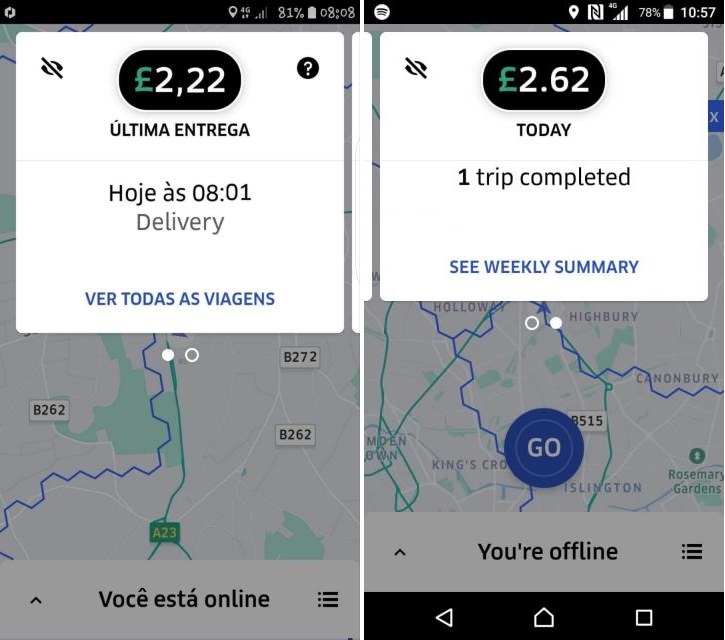 Tags: courier, food, London, precarity
← For the Balkans of struggle and solidarity – statement from the 12th Balkan Anarchist Bookfair
Capitalism is Killing the Earth – An Anarchist Guide to Ecology →