Browse: Home   /   Thousands take to the streets in Greece 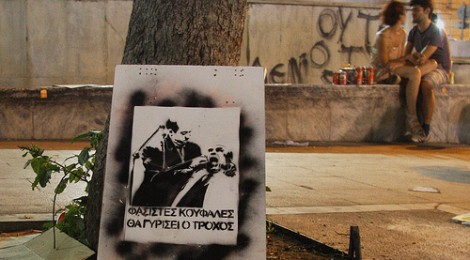 Thousands take to the streets in Greece

Thousands of people have been occupying public squares in Greece to protest the government’s continuing austerity drive. Syntagma Square, in front of the parliament building, has been the principle focus of the occupations with thousands camping out and holding regular mass assemblies. The actions culminated in an attempt to blockade the parliament building on the day of the general strike, a plan that prompted widespread repression and confrontation with the police (including use of new motorcycle units who are equipped with metal clubs, tear gas and stun grenades). Police are also reported to have stopped ambulance crews from assisting injured protesters. An estimated 20-30,000 people filled the square, making it a far larger and more diverse action than any opposition seen so far. Protesters also attacked the luxurious Hotel Prince George and the Ministry of Economics. In response to the ongoing crisis the government has called for a “national unity” coalition, the assembly, however, has responded that it will continue to hold the square until governments, banks and the IMF are ousted.

The strength of the occupations, their size and their commitment to direct action and non-representational methods of organising are certainly inspiring and show the credibility of anarchist methods in practice. This aside, some in the existing anarchist movement have pointed to the need for more sustained intervention as there is an ongoing commitment to pacifistic methods (in spite of police provocation) and some of the actions are backed by nationalist sentiment, e.g. defending the Hellenic Republic from the “foreign” intervention of the EU and IMF. The latter has prompted the involvement of fascist groups who, in a surprising move, attended the protests during the General Strike (after a clash with anarchists they were ousted from the demonstration). More worrying reports have also come through of hostility to the use of anarchist banners and flags within the occupation itself. Nonetheless, the examples set by Greek workers are positive and testament to the power of direct action. Most importantly they point to a clear strategy – to escalate dissent to a point where the system is ungovernable – in the international fightback against austerity.