Browse: Home   /   Solidarity Statement with Anarchists and Anti-Fascists marching throughout France against the murderers of Clément Méric 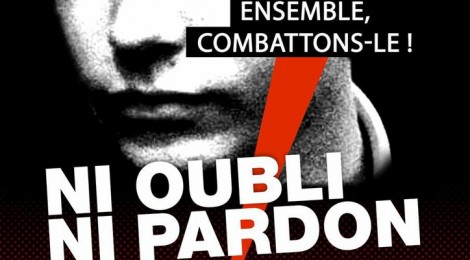 This weekend, Saturday 22rd and Sunday 23th June, will see huge anti-fascist demonstrations throughout France. The participants will be making known their anger at the murder of the much loved 18-year old Parisian antifascist student, Clément Méric (see article below). The message will be ‘Never Forgive, Never Forget’. This comment is not only about the death of their comrade, but a comment about fascism itself, both as it is manifested at the moment in France, and as it has manifested itself historically and in many countries.

The attack in which Clément Méric died has shocked people in France more widely than anarchists and antifascists. But this mainstream response has been unhelpful in fighting the far-right. It seems that left-of-centre liberals and reformists and also the ‘socialist’ government itself are taking over commemorations as far as they can, and claiming Clément as one of their own, diluting the message of militant antifascism. This is insulting to his memory and to the feelings of those close to him. But more than that, it justifies the state proscription, announced by President Hollande, of the far-right group that many consider responsible. This is not the way to defeat fascism. It must be defeated by the deeds and words of antifascists and of the groups and communities threatened by fascism. When has state repression ever killed an idea or a belief successfully? It will create martyrs as the right resists the new law. The way to be rid of fascism is to work every day towards a society in which its ideas become irrelevant and working class people of all kinds feel united in struggle: against the state and the capitalist system; against neo-colonialist wars and the militarisation of our society; against racism, sexism, homophobia, and all other bigotry that attacks who we are and how we want to live.

Some on the authoritarian left will support the outlawing of fascist groups, on the basis that these will now be less visible and less vocal. Libertarian communists, such as ourselves, oppose attempts at state censorship. But, because the goal of fascism is to silence the voices of others, it must be denied a platform nonetheless. So we deny it a voice through community-level action. This is because, if the authoritarian right is silenced primarily by an act of the state, similar laws can be used against anyone seeking change without going through the state.

In this specific situation, the French state and media choose to stress that the fascist group in question considers itself ‘revolutionary’. Its idea of ‘revolution’ is a million miles from ours. But if ‘revolution’ because a dirty word, something that decent people should oppose, and if, like the term ‘communist’, it loses all positive meaning, we will find ourselves fighting an even harder battle for the transformation of society along anarchist-communist lines.

Fascism thrives in societies suffering economic crisis. It is no surprise that it is now more visible in France, where it is using the recent legalisation of gay marriage as an excuse to promote bigotry. In Britain, the far-right is becoming more visible too. Here it uses the horrible murder of Lee Rigby to promote violence against Muslims in general, including children. Homophobia and racism are symptoms of societies in which some people feel marginalised, ignored, and abandoned by the state, and have nothing to resort to but hatred of other groups. We have to change this analysis with our ideas and our actions, by creating positive, examples of how society can organise itself better, to benefit all of us. But we are not pacifists. We want to win hearts and minds but we will not let fascism undermine the equality and freedom that humanity deserves. NO PASARAN!

Fachos hors de nos vies! Fascists out of our lives!