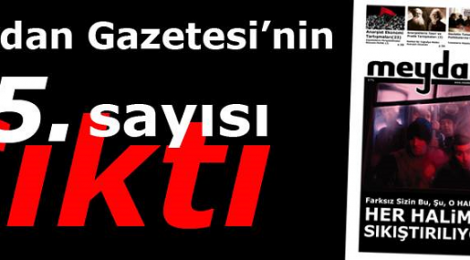 Repression of anarchists in Turkey â€“ solidarity with Huseyin Civan, Meydan and DAF

W / 04/01/2017 / Comments Off on Repression of anarchists in Turkey â€“ solidarity with Huseyin Civan, Meydan and DAF / Events, News

The wave of repression unleashed by the Erdogan regime in Turkey has resulted in thousands losing their jobs and thousands imprisoned. Recently Huseyin Civan, managing editor of Meydan, a paper that represented the views of the DAF (Devrimci Anarsist Faaliyet / Anarchist Revolutionary Action), received a prison sentence of one year and three months.

This was the result of the action of the chief public prosecutor who pursued Meydan over articles published in issue 30, December 2015. The charge against our comrade was â€œmaking propaganda for the methods of a terrorist organization constituting coercion, violence or threats through legitimizing or praising or encouraging the use of these methodsâ€.

Meydan was closed down after Erdogan began a campaign of repression after the recent failed coup. The imprisonment of Civan is another heavy blow against the anarchist movement operating within Turkey.

Advocating a system based on mutual aid and equality, defending workers’ struggles, arguing for gender equality and the freedom of the individual , against nationalism and fascism are seen as terrorist crimes by the Erdogan regime.

Representing Meydan and Civan, lawyer Davut Erkan stated that the decision was illegal and would be appealed, if necessary, all the way to the Constitutional Court and the European Court of Human Rights.

The Anarchist Federation sends a message of solidarity to Huseyin Civan, Meydan and the DAF.

Messages of solidarity can be sent to:
https://www.facebook.com/meydangazetesi/

← 2017: what it holds, and what all anarchists can do about it
Glasgow AF Meeting on Disaster Communism and Mutual Aid →
Posting....
Skip to content