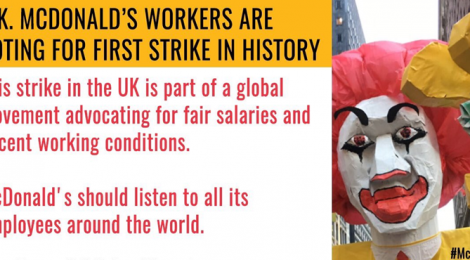 McDonalds workers at branches in Cambridge and Crayford in S.E. London are set to strike on Monday Sept 4th 2017. This will be the first ever strike at a UK branch.

Many McDonalds workers actually struggle to feed and house themselves on minimum wage, and a whopping 96% of those balloted voted to strike for £10.00-an-hour. They are also demanding an end to what are effectively zero-hours contracts and generally outrageous working conditions, including informal penalties for joining a union.

This is an incredibly brave action. It is not a strike in which well-represented workers with secure contracts and strike pay can flex their muscle collectively and prove that the bosses can’t do without them. It is a strike by those left literally with no other choice in one of the least secure and most exploitative sectors of employment. But even this sector can make gains for workers if there is enough solidarity for them and if they organise in radical ways. In the UK and US the Industrial Workers of the World, Anarcho-Syndicalist unions and other non-hierarchical and worker-led organisations have made gains by standing strong. Pressure already being put on McDonalds has meant that they now technically now offer workers a choice of flexible or fixed-hours contracts, although many workers apparently did not even know that this was the case until it was ‘announced’ after the strike ballot took place.

In the US the demand is for $15.00 and similar action is being taken on Monday too, which is Labor Day. For IWW analysis https://www.iww.org/content/beyond-fight-15-worker-led-fast-food-union-campaign-building-power-shop-floor

So please go down to support McDonalds workers if you can. Show them that they can rely on more radical support than they will undoubtedly get through their union, the Bakers, Food and Allied Workers Union. Or picket your local branch to show solidarity for others considering striking, as is happening in many towns https://fastfoodrights.wordpress.com/. Follow and share news about the strike here https://twitter.com/hashtag/mcstrike.

See also here for anarchist analysis of past anti-McDonalds activism since the early 2000s, which many libertarian communists have been involved in https://libcom.org/tags/mcdonalds-workers-resistance?page=4

Watch a documentary about the inspiring victory of anarchists in the McLibel trial in 2005 https://www.youtube.com/watch?v=V58kK4r26yk 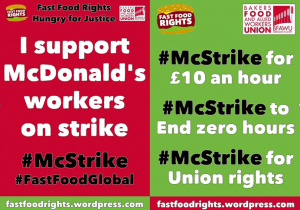 ← Mourn the Dead and Fight Like Hell for the Living! – Resistance Bulletin #162
DSEI ARMS Fair-Demo on September 9th →
Posting....
Skip to content