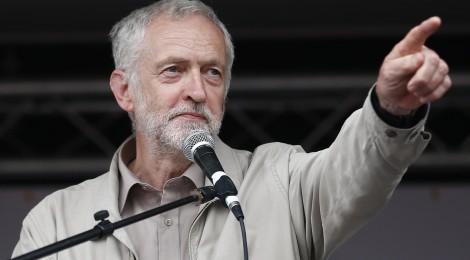 JC’s not our Saviour (but lefties say he is)

Whether Jeremy Corbyn wins or loses the leadership contest for the Labour Party, one thing is clear: the Labour Party is in severe crisis and has been for some time. Labour’s almost complete wiping out in Scotland was one sign of this. The Corbyn “surge” is another.

Many working class people are disgusted by the increasing austerity measures. This can be seen in the sort of mania usually associated with the Beatles in times gone by at rallies for Corbyn. What we are now witnessing is practically every sort of British Trotskyist and Stalinist as well as many union bureaucrats and various personalities like Charlotte Church and Ken Loach jumping on board the Corbyn express.

After Labour’s devastating defeat in the May election, some elements in the Labour leadership thought that it would be a good idea to have a token left candidate in the Party leadership elections. Modelled on the US primaries, the leadership race was designed to give an appearance of democracy whilst taking away any real say from what was left of the base membership of the Party.

On one hand the Labour Party could say it was being inclusive, on the other hand Corbyn’s expected and immediate defeat would show that there was no room at all for what was left of the Labour Left and anything that at all jarred with the hymn to the market that was being sung by the Labour leadership and the party machine.

For his part Corbyn is rather a mediocre personality. For years he would have been seen as being on the centre-Left of Labour, offering the standard social-democratic politics. The shift to the right of the party, and the shrinking of its left wing, means that now Corbyn is seen as some sort of radical, which says a lot about the political situation in Britain.

Corbyn is concerned that Labour would suffer the same fate as other social-democrat outfits in the rest of Europe, warning :

It’s very interesting that social democratic parties that accept the austerity agenda and end up implementing it end up losing a lot of members and a lot of support. I think we have a chance to do something different here.

In particular he was thinking of PASOK in Greece and the Socialist Party in Spain.

Corbyn was now in the lead in the leadership race. He won the backing of several unions , including UNISON and Unite. The union leaders greatest nightmare is that new movements will emerge that challenge Labour and the whole austerity scenario.

In fact, Labour is now in severe crisis. Some rich donors to Labour warned that they would withdraw funds if Corbyn won, whilst elements in the Labour leadership are plotting a coup if this happens. Shadow Cabinet members briefed the media anonymously, talking of a bid to remove Corbyn if he wins just after the September 12th results. As one unnamed source stated:

We will have to decide whether he should be removed immediately, or whether it would be better to give him a year or two of being a disaster and get rid of him by 2018.

The fears are that too hasty a move would cause a damaging split within Labour.

Corbyn does not want such a split, even if some of his left allies do. He has been a loyal Labour MP for 30 years, staying within it through thick and thin, through the Iraq War to which he was opposed and now after the majority of Labour MPS abstained on the Welfare Bill.

If elected he will face the enmity of the party machine, peopled with Blairite drones, and the majority of Labour MPS, wedded to Blairite and Brownite ideas. The party machine was designed by Blair to control the Party, to decide lists of electoral candidates, both in local and national government and to stifle any opposition. Either he will be removed or he will be constrained to follow the main Labour agenda.

During the last Coalition government the union leaders did nothing to combat austerity, waiting for over a year before they even called an A to B march before throwing in the towel. As a result hundreds of thousands of jobs were lost and billions of pounds of cuts were carried out.

In this situation we saw the rise of the People’s Assembly (PA), backed by the Stalinists of the Communist Party and the Morning Star, by the Trotskyist outfit Counterfire, the Green Party, and the Labour Left. They were supported by leaders of Unite who spoke at the People’s Assembly recent anti-austerity march and where Corbyn was touted for Labour Leader.

The PA was intended to be a left cover for the union leaders to sabotage and call-off of any significant strike that could have challenged the Coalition. The PA leadership overwhelmingly supports Labour, although until recently it felt constrained to do so openly because of how discredited Labour was.

Now it can, and so can other left formations designed to attempt to replicate “old” Labour like Left Unity, which is supported by ex-members of the Labour left, and by many Trotskyists. From the Communist Party to the Trade Union and Socialist Coalition, practically every leftist gang is now rooting for Corbyn. Where once some of them had plans to create a new Party similar to old Labour and hostile to the present Labour Party, now they are hypnotised by the seeming success of Labour.

As a result their own formations may be passed by and indeed destroyed as hundreds flood back into Labour. Why should working class people give any credibility to those who one minute say that Labour is a party of big business and the market and in a blinking of an eye decide that the election of a new Labour leader offers new hope?

Grassroots groups and organisations emerging around housing and opposition to austerity must maintain their grassroots outlook and their horizontal organisation. The alternative is distraction from their vital action by the Corbyn circus and its left-wing cheerleaders; a path which only leads to disappointment and betrayal.