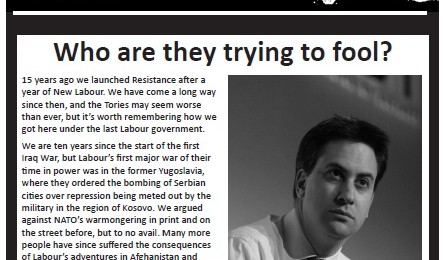 Who are they trying to fool?

15 years ago we launched Resistance after a year of New Labour. We have come a long way since then, and the Tories may seem worse than ever, but it’s worth remembering how we got here under the last Labour government.

We are ten years since the start of the first Iraq War, but Labour’s first major war of their time in power was in the former Yugoslavia, where they ordered the bombing of Serbian cities over repression being meted out by the military in the region of Kosovo. We argued against NATO’s warmongering in print and on the street before, but to no avail. Many more people have since suffered the consequences of Labour’s adventures in Afghanistan and Iraq.

As the Coalition launches a new wave of benefit attacks, let us cast an eye back to another snippet from Resistance issue 1, where we reported that Newcastle benefits agency had carried out a sustained months-long victimisation campaign against Incapacity Action member Chris Marshall. They confiscated his benefit book and paid him nothing for weeks on end. Chris, who was waiting for joint replacement surgery, was told by the SS to “get a job instead of sponging off the State” (yes, it really was still called Social Security in 1998!).

This is worth bearing in mind whilst the Labour opposition and its Trotskyist apologists bleat about how much they are against the unfairness of the Bedroom Tax and the other nasty welfare cuts that begin this month.

Massive NHS reforms also get underway this month, with almost the entire budget passing to the control of GPs and a National Commissioning Board, with immense pressure to buy as cheap as possible. But let’s not forget that when it was last in power Labour massively pushed forward the ‘purchaser-provider split’ in healthcare that was begun by the Tories in the 1990s. It is this that is allowing more for-profit companies into the NHS. Not only this, but Labour were responsible for the creation of Treatment Centres and outsourcing of NHS purchasing to the logistics company DHL. They also presided over further contracting out of cleaning and of GP out-of-hours services.

So the record of Labour in power is clear and anyone who thought they were better last time around, and has maybe forgotten what they got up to, would do well to examine the history books and not be fooled again.

Recent massive rises in food prices are yet another attack on working class people. These price increases are hitting the poorest the hardest as they spend the greatest percentage of their income on food. For the rich, the impact will be like being hit by a feather. Price hikes are blamed on ‘natural’ factors like drought, bad harvest and the increase in demand outstripping supply. This may be part of the story but the basic cause of rising food prices is the way the capitalist food system works. Food is a global commodity, bought and sold by huge corporations. Rather than food being produced for local use, it is shipped all around the world, with many countries, including Britain, unable to feed themselves without importing. In addition, food is the target of speculation, with banks essentially ‘betting’ on food and causing a large part of recent price rises. Desperate to increase their profits, the supermarkets who dominate food sales in the UK make sure that they pass on price rises to consumers.

May Day for most people is a nice bank holiday break – a chance to get away from the city for the weekend with the kids or a lie in, in the morning. May Day began as a call by workers in America for shorter working hours. The first Mayday actions took place in 1886 where mass strikes, meetings and demonstrations were held across America. In Chicago, the lock out of 1,500 workers at the McCormick Reaper Company turned up the heat on the actions. 80,000 people struck and picketed in Chicago alone.

Two days later during one such picket police opened fire on the strikers who were stopping scabs crossing the picket line. As a result, 6 people were killed. A mass demonstration was called in response the next evening at the Haymarket. 200 cops arrived to disperse the gathering, but the protesters would not be moved. In the battle that ensued, a bomb was thrown at the lines of armed cops, killing one and fatally injuring others. 30 people died in a hail of police bullets.

The press whipped up hysteria about the bombing and the police rounded up well-known anarchists. As a result eight were brought to trial and despite there being no evidence to link them to the bombing the defendants were found guilty and four of them were executed, another only escaping hanging by blowing his own head off with a stick of dynamite! As Albert Parsons said on the gallows: The time will come when our silence will be more powerful than the voices you strangle today!

This article was first published in Issue 1 of Resistance in 1998.

An impressive 15 date speaking tour by a member of the Belarusian Anarchist Black Cross described the harsh situation for anarchist prisoners inside ‘Europe’s last dictatorship’. The tour kicked off on February 15 in London and visited venues around England, Wales and Scotland, finishing on March 8. Around 350 people in all attended the various meetings that were organised by the AF and UK Anarchist Black Cross groups.

*On March 5 a wildcat strike flared at Lonmin PLC’s platinum mine in Marikana, South Africa. The owners had just invited journalists to tour the mine, but thousands of workers went on strike. Last August 34 striking miners were shot dead and 80 others injured by the ANC controlled police at the same mine.

*Workers at the Bosch factory in Bangalore, India went on a wildcat ‘tool down’ strike on March 7. The strike is the second in 18 months. Previously workers had launched an illegal strike against a move by bosses to outsource some jobs at the factory.

*At the start of March, illegal strikes started at five Exxaro Resources mines in South Africa. The unofficial strikes began at two mines in Mpumalanga then spread to mines in Limpopo, stopping production. The strike ended on March 23.

*Hundreds of refuse workers walked out on March 15, in Oakland, California. The wildcat flared because the company has been threatening employees, mistreating immigrant workers and imposing stricter rules. The strikers at Waste Management included landfill, clerical, customer service and recycling workers.

*An illegal and very militant strike at two South African Post Office sorting centres started on February 14 and finished the end of March. Doors to the depots were locked because management feared the striking workers.

*On March 26 police escorted managers across a picket line at the Labatt brewery in Canada. Bosses training replacement workers incase of future strikes sparked the wildcat action. “The scabs went in, these guys walked out,” a worker said.

8th April 2013 marked the death of one of Britain’s most despised former Prime Ministers, Margaret Thatcher. While the government and many national news networks were quick to issue messages of praise and bereavement for the late Thatcher, street parties formed just as swiftly to celebrate her overdue demise. Around 40 parties took place in the UK and abroad, with hundreds gathering in Brixton, Glasgow and Bristol. One of the elite’s most disliked may have passed away, but it is important to remember that the destructive ideals and policies she embodied still remain, and must continue to be opposed.

During March 24 Russian police arrested 12 protestors near Moscow’s Red Square. 40 activists were on the demo displaying slogans such as “Freedom to Political Prisoners”. The demo called for the release of people who had taken part in an anti-Putin rally in May 2012 when 400 people were arrested. So far 21 of them have been charged and one person has been sentenced to four-and-a-half years in prison.

Nearly 50 prisoners escaped a prison in the Libyan city of Sabha. Before the mass breakout on March 26, prisoners had rioted against jail conditions. They set fire to cells and smashed up doors then managed to get over the prison wall. Police shot one prisoner dead during the escape and nine were arrested.

On March 27 cheering and whistling prisoners occupied the jail yard as part of the resistance against conditions at the Cibola County Correction Centre in New Mexico, USA. The 250 protesting prisoners refused orders from screws to return to cells until the evening.

For more info on resistance to prisons search the Campaign Against Prison Slavery (CAPS) and Anarchist Black Cross (ABC) websites.

← Homebase workfare week of action enters Day 4
AF bulletin Resistance #150: Who are they trying to fool? →
Posting....
Skip to content