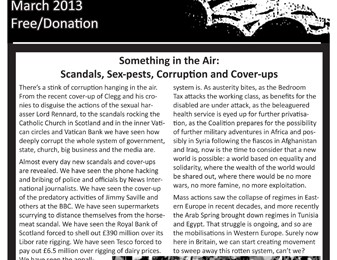 1. Something in the Air: Scandals, Sex-pests, Corruption and Cover-ups

There’s a stink of corruption hanging in the air. From the recent cover-up of Clegg and his cronies to disguise the actions of the sexual harasser Lord Rennard, to the scandals rocking the Catholic Church in Scotland and in the inner Vatican circles and Vatican Bank we have seen how deeply corrupt the whole system of government, state, church, big business and the media are.

Almost every day new scandals and cover-ups are revealed. We have seen the phone hacking and bribing of police and officials by News International journalists. We have seen the cover-up of the predatory activities of Jimmy Saville and others at the BBC. We have seen supermarkets scurrying to distance themselves from the horsemeat scandal. We have seen the Royal Bank of Scotland forced to shell out £390 million over its Libor rate rigging. We have seen Tesco forced to pay out £6.5 million over rigging of dairy prices. We have seen the appalling treatment of patients at the Mid-Staffs Hospital (and take it as read that that is the situation prevailing at other hospitals with 9 more hospital trusts to be investigated).

Revelation after revelation is appearing at an accelerated rate. This is an indication of how unfit for use the present system is. As austerity bites, as the Bedroom Tax attacks the working class, as benefits for the disabled are under attack, as the beleaguered health service is eyed up for further privatisation, as the Coalition prepares for the possibility of further military adventures in Africa and possibly in Syria following the fiascos in Afghanistan and Iraq, now is the time to consider that a new world is possible: a world based on equality and solidarity, where the wealth of the world would be shared out, where there would be no more wars, no more famine, no more exploitation.

Mass actions saw the collapse of regimes in Eastern Europe in recent decades, and more recently the Arab Spring brought down regimes in Tunisia and Egypt. That struggle is ongoing, and so are the mobilisations in Western Europe. Surely now here in Britain, we can start creating movement to sweep away this rotten system, can’t we?

On Saturday 26th January over 200 people took to the streets of Halesowen to demand the reinstatement of four members of the Maths department who had been sacked. On a cold day, with snow on the ground, there was a fantastic array of banners and placards showing how far people had come to express solidarity with the Halesowen four.

Music and speeches made for a carnival atmosphere as workers, students and members of the local community assembled outside the gates of Halesowen College.

The reason that these sackings have caught so many peoples’ attention was highlighted in many of the speeches. Educators realize that if these unprecedented dismissals, based solely on student outcomes, are allowed to go unchallenged then no teacher is safe. Any college, school or university can ignore local and national agreements and tear up contracts because they can apply any arbitrary measure to isolated sets of student results, ignoring other outcomes that may not suit their purpose, in order to justify sacking staff. This notion of sacking at will is not only a very real fear in education but across all areas of working life.

Following a demonstration of over 300 staff and students in opposition to the privatisation of services at Sussex University; a large group of people occupied the university conference centre on February 12th.

In May 2012, the University announced its unilateral decision to sell off most services provided on campus, over 10% of its workforce, to private investors. This announcement came with no student consultation, and next to no consultation with the 235 workers concerned. Since then, management has failed to offer any more than a series of “negotiations” and piecemeal Q&A sessions, only after repeated requests by students and staff, and the conclusions of which it repeatedly proceeded to ignore.

The workers and students demand:

Over 200 lecturers at Reid Kerr College, Paisley, started a series of rolling strikes on February 27th.

The lecturers are fighting attacks on their wages and conditions. Around 40 pickets covered the four college gates on a freezing cold day. Reid Kerr, like all FE colleges in Scotland, faces massive attacks. The Scottish government wants another £30 million worth of cuts this year by merging colleges. Reid Kerr is to be merged with James Watt and Clydebank colleges. Workers at both these colleges supported the Reid Kerr strike.

Strikers plan a further strike for two days for each of the following two weeks and a three-day strike each week until June if there is no movement from the management.

Meet at 11 am at Finchley Central Station

Barnet Alliance are building towards a demonstration on the 23rd of March in Barnet. They aim to turn it into an all-London event, since Barnet is the flagship of the government annihilation of local services, running under the name One Barnet. The scheme involves handing over 90% of the council services to private companies (Capita is the preferred bidder with the Tory council) nailed into a 10-15 year contract, worth around £1bn. This means massive lay-offs of the local work force, major cuts to services and moving services out of the borough. You are all invited to participate, and to spread the word.

Australian prisoner Jock Palfreeman, currently serving a 20-year sentence in Sofia, Bulgaria for defending two Roma boys from a racist mob, was on hunger strike this January. The Director of the Central Sofia Prison had ordered another punishment measure because of Jock´s activist work as chairman of the Bulgarian Prisoners Association. Due to this punishment Jock is now not allowed to finish his education.

After 30 days Jock ended his hunger strike, having lost 20 kilograms, because he got an answer from the prison administration. However, they will only allow him to study in a Bulgarian university, not in a foreign one. Bulgarian universities do not accept prisoners as students, so in practice he is not permitted to continue his studies. However, he can now apply in the courts against the decision.

The issue is not resolved, so please continue to write letters of complaint to the Ministry of Justice in Bulgaria.

Write letters of complaint to:

Write letters of support to:

Sign this petition to the Bulgarian Ministry of Justice: To Approve Jock Palfreeman’s Prison Transfer to Australia

Industrial Workers of the World (IWW) and members of the anarchist Common Cause Toronto joined picket lines in support of striking refuelers employed by Porter Fixed Base Operations at the Toronto Island airport. The strike has been bravely fought by 22 workers fed up with unsafe working conditions and low wages. Workers currently earn just 12 dollars an hour.

A recent picket saw IWW and Common Cause members come down to the lines in the bitter cold. Workers stopped cars going into staff parking lots for over 10 minutes. Delays this long are rare on picket lines today, with standard delays being just 2 to 3 minutes. In addition on January 26 a large number of anarchists, IWW members and others, with encouragement from the striking workers, blocked the only road into the airport causing serious disruption.

It remains to be seen if or when Porter will come to the negotiating table, but what is clear is that when they do the IWW and Common Cause will have a real voice with the workers to help ensure the refuelers’ demands are met in full.

8. Prisoner Support on the Web

Haven Distribution buys books for inmates who are on courses in prison. They supply dictionaries to inmates whose first language is not English and send to prisoners with dyslexia books on improving reading and writing skills.

G&BC was set up to support autonomous social struggles. GBC was inspired by the Anarchist Black Cross plus skills and networks built up by elements of the environmental movement.

Campaign Against Prison Slavery campaigns against compulsory labour in British prisons. The CAPS site has many articles; news, analysis, links and suggested books about prison

LDMG monitors police activity on demonstrations & pickets; assists anybody assaulted by the police or wrongly arrested to sue the police and provides support to those held on remand. LDMG have produced No Comment and The Survival Guide to Prison.

A letter to a prisoner helps to maintain a connection with the outside and relieves the tedium of a regime that often involves spending 23 hours a day in a cell. Leeds Anarchist Black Cross produce a leaflet Writing to Prisoners. For addresses of prisoners to write to, search for Anarchist Black Cross Brighton, Bristol, Cardiff, Leeds or London.

Organise! is the Anarchist Federation’s theoretical and historical magazine. It is published in order to develop anarchist communist ideas. It aims to give a clear anarchist viewpoint on contemporary issues, and initiate debates on areas not normally covered in agitational journals.
You can order or subscribe online at www.afed.org.uk, or get in touch with your local AF group for a copy.