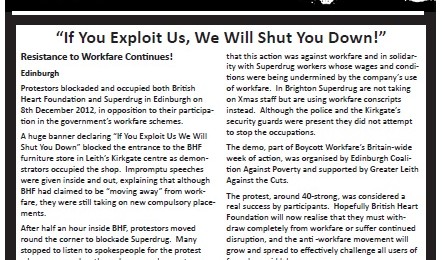 IF YOU EXPLOIT US, WE WILL SHUT YOU DOWN!

Protestors blockaded and occupied both British Heart Foundation and Superdrug in Edinburgh on 8th December 2012, in opposition to their participation in the government’s workfare schemes.

A huge banner declaring “If You Exploit Us We Will Shut You Down” blocked the entrance to the BHF furniture store in Leith’s Kirkgate centre as demonstrators occupied the shop. Impromptu speeches were given inside and out, explaining that although BHF had claimed to be “moving away” from workfare, they were still taking on new compulsory placements.

After half an hour inside BHF, protestors moved round the corner to blockade Superdrug. Many stopped to listen to spokespeople for the protest who gave speeches through a megaphone, stressing that this action was part of the wider resistance to the attacks by the rich on the poor. Hundreds took leaflets denouncing workfare and in particular the new imposition of workfare on the sick and disabled. Many people came up to the stall outside the occupied stores and joined ECAP’s solidarity network for mutual support against the authorities.

Demonstrators then moved inside Superdrug, where a protestor gave a speech explaining that this action was against workfare and in solidarity with Superdrug workers whose wages and conditions were being undermined by the company’s use of workfare. In Brighton Superdrug are not taking on Xmas staff but are using workfare conscripts instead. Although the police and the Kirkgate’s security guards were present they did not attempt to stop the occupations.

The demo, part of Boycott Workfare’s Britain-wide week of action, was organised by Edinburgh Coalition Against Poverty and supported by Greater Leith Against the Cuts. The protest, around 40-strong, was considered a real success by participants. Hopefully British Heart Foundation will now realise that they must withdraw completely from workfare or suffer continued disruption, and the anti -workfare movement will grow and spread to effectively challenge all users of forced unpaid labour.

On Saturday 8th December 2012 Clydeside IWW, the Crutch Collective, Glasgow Anarchist Federation, Glasgow Solidarity Federation, the Right To Work Campaign and other individuals leafleted a branch of Superdrug in one of the city centre’s busiest streets. The one thousand leaflets given out highlighted Superdrug taking on even more people on the Government’s ‘Work Experience’ workfare scheme for the Christmas period. Apparently someone also left placards saying ‘Superdrug + Unpaid Work = Superdrudgery’ outside their other city centre branch.

The extra people on workfare means less holiday pay for the regular staff. There was a lot of police about and Superdrug had hired extra security for the day. However the combination of the picket, the leaflet saying, ‘Don’t Shop At Superdrug’ and the added security costs meant we succeeded in our objective of costing Superdrug money for using Workfare.

The Superdrug distortions – ‘Work Experience’ is not voluntary in practice. Job Centre Plus and third party workfare profiteers like A4E bully benefit claimants on to the scheme. Benefit claimants can have their benefits cut if they do not continue to ‘volunteer’ to stay on the scheme, after they have been on the scheme for a week. Only a tiny number of people on workfare get jobs afterwards

On December 8th, 2012, members of the Anarchist Federation in Bristol, together with other anarchists, feminists, socialists and miscellaneous angry rebels shut down the central Broadmead branch of Starbucks for the whole afternoon, before regrouping and doing the same thing in Park Street. The response we got from passersby was overwhelmingly positive, with many people joining in ( 40 at the peak of the two hour demo).

Starbucks were targeted due to their tax evasion and their refusal to pay staff a decent wage or treat them with respect. Both of these things are symptoms of the class struggle. The rich corporations hoard their money whilst workers and the poor have to deal with lower wages, slashed benefits and cut services.

We strive to live in a world free of states as well as capitalist organisations such as Starbucks. However we recognise that until we all collectively control our own communities and workplaces together we need to struggle to meet our needs as part of the working class. This at times includes fighting to keep state-run services operating when it is in our collective intrests. The working class and anarchists don’t benefit from having wealth taken away from essential services to be hoarded by capitalists!

We hope these fights will strengthen our sense of solidarity with each other and increase our antagonism towards the state and capital.
http://bristolaf.wordpress.com/

Freedom Bookshop, home of Freedom Press and a cornerstone of the anarchist movement for over 125 years, was firebombed in the early hours of Friday 2nd February. Nobody was hurt in the fire which partially gutted the ground floor and damaged the building’s electrics.

Freedom Press is Britain’s longest running anarchist publisher and traces its history back to the original Freedom paper started by Charlotte Wilson and Peter Kropotkin in 1886.

The bookshop has since re-opened, using the upper floors as the “Rainbow Bookshop” until the downstairs area has been repaired.
Numerous support & fundraising events have taken place across the country since the attack in a fantastic show of solidarity with the iconic publisher.

Further information on the attack and announcements of upcoming support events can be found on the Freedom Press website:
http://www.freedompress.org.uk/

Press Event: 11th February.
16th February: Save Our Hospitals Hammersmith and Fulham campaign’s Day of Action;
19th February: Decision meeting by NW London NHS on the proposed closures of all four A&Es at Charing Cross, Hammersmith, Ealing and Central Middlesex (afternoon); Candle lit vigils outside Charing Cross and Hammersmith hospitals will continue every Sunday at 5-6pm into mid-February. There will be a National Demo to stop the A&E closures in England and Wales followed by on-going protests and events.

The above are being organised by local residents and grassroots campaigns. All welcome.

London AF are starting an “in-house presence” at our office on 1st floor of Freedom Bookshop on the second Tuesday of each month between 5-7pm to offer an opportunity to meet up and talk with us.
Schedule:
Tuesday February 12th
Tuesday March 12th
Tuesday April 9th
At Freedom Bookshop , Angel Alley, 84b Whitechapel High St, London E1

The squatter’s movement arrived in Greece during the early and mid-nineties, and has since established itself as a popular form of peaceful, all-inclusive form of activism bringing together anarchists and autonomists from all over the world. Based on the principle of repatriating public and private space to the hands of local community use, squatting spaces aim to replace commercial and state functions with an environment of direct democracy, mutual labour and an oasis for alternative socio-political and cultural expression.

Located in the centre of Athens, the Villa Amalia squat is one of the oldest of its kind in the city – boasting twenty-two years of existence. Like many other forms of occupation, it has had a traditionally strenuous relationship with authorities, which have attempted to infiltrate, sabotage and literarily starve it of supplies and access from its first days. It’s not the first time we’ve heard about it on the news, but a surprise police raid on the premises at approximately 07:00 am has sent events spiralling into action. Eight squatters, six Greek and two of possible German nationality, were arrested on sight and remain detained in the police headquarters nearby, as activists from several anarchist, autonomist and squatting groups gathered across the street where the raid was being carried out in solidarity of the detained. In their announcement, comrades stated that they will remain in the vicinity and are increasing in number.

The police intervention, hailed on statist, right wing and Golden Dawn-sympathetic blogs as a heroic purge of what they interpret to be brothels of chaos and disorder, continued throughout the day as they conducted a search of the premises. Police forces were accompanied by a comrade who witnessed the procedures.
Squats, in contrast to their portrayal as centres of terrorism, drug abuse and alcoholism, play an active community role in protecting the neighbourhoods from fascists, human trafficking and the illegal sex and drug trade. There are many voices in society who, despite not identifying with left-libertarian principles, have risen to defend their right of existence based on the premise that they have given local communities the power to determine the face and running of their daily lives. Squats in Athens have also begun to shoulder a new role as centres of anti-fascist organisation in the face of the state-facilitated rise of the Golden Dawn.
Solidarity with the squatters of Villa Amalia!

Despite the welcome release of Pavel Syramolatau in September 2012, 5 anarchists supported by the Anarchist Black Cross are still in Belarusian jails facing years of incarceration since being convicted of a range of crimes in 2011.

The criminal damage for which these comrades were sentenced amounts to only a few hundred dollars in each case. They are being in especially harsh conditions, reflective of their noncompliance.

These convictions form part of an ideologically driven repression of anarchists in Belarus. They follow the revitalisation of Belarusian anarchism in the past few years.
The Belarusian ABC has campaigned consistently for them to be released and, in the immediate term, for them to be allowed visits, medication, letters and literature, and raises money for solicitors’ fees and to buy the comrades’ food. Supported by the International of Anarchist Federations (IFA-IAF) they are undertaking a tour of France, Italy, Germany, Spain and UK, to raise awareness and spark further solidarity. The latter have a good chance of success because Belarus’ President Alexander Lukashenko has expressed a desire for the country to be allowed to join the E.U. There are rumours that this may be considered if human rights in the country are addressed.

A speaker will be coming from Belarus in February-March to discuss the situation for activists in the country and to build solidarity for the prisoners.
Please see http://www.afed.org.uk for up to date listings.

Organise! is the Anarchist Federation’s theoretical and historical magazine. It is published in order to develop anarchist communist ideas. It aims to give a clear anarchist viewpoint on contemporary issues, and initiate debates on areas not normally covered in agitational journals.
You can order or subscribe online at www.afed.org.uk, or get in touch with your local AF group for a copy.