Browse: Home   /   I Had My Hands Up – My First Experience With Police Brutality 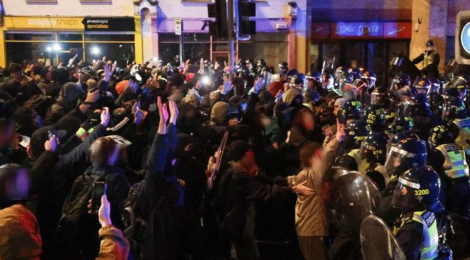 I Had My Hands Up – My First Experience With Police Brutality

On Friday night, approximately 2000 protesters showed out in Bristol, once again to demand the government kill the bill. Much like the protest on Sunday, it started with marches and chanting, and much like on Sunday and Tuesday, it ended with police beating the shit out of us.

It was also one of my first protests as part of an (admittedly small) anarchist bloc, and my first experience with police brutality – and thus, my first experience of how we treat each other after suffering violence at the hands of the police. Before the police started hitting us with riot shields, batons, and their feet, there was a stand-off, lasting multiple hours, with protesters peacefully chanting – including multiple periods of people chanting for “peaceful protest,” and riot police forming at least three ranks in front of us, with police vans to back them up. Obviously, a completely proportionate use of resources, and in no way a waste of funds.

The majority of the stand-off was just that – standing. However, there are three things that really stuck out for me. The first was a maybe 10 minute stare-down with a cop, right at the police line – nothing particularly exciting, if I’m being honest, but certainly formative. There’s a real difference between hearing from other comrades how much cops hate us, and making eye contact with them for yourself. Also, half of them weren’t wearing masks or visors, and were laughing and chatting with the fash who showed up, just in case anyone thinks they were there for public safety. The second was a drunk man harassing girls in the middle of the crowd. Yes, a man harassing women at a protest at least partly kicked off by a misogynistic act of police violence. I wish I had it in me to be surprised. We escorted him away, eventually, but not without being called both militant communists and undercover cops by people, and then it was back to waiting in our little spot near the front.

The third was the sheer number of people telling us to sit down, to be peaceful, to avoid posing a threat. As non-threatening as it made them look, sitting down did not stop anyone from being bladed with riot shields, beaten with batons, or kicked. Putting flowers on riot shields did not stop police from brutalising people, either, as had already been shown on Tuesday, but that didn’t stop them from trying again. It is the thing that was probably most upset me about that night, more so than the violence that I  experienced.

Speaking of, I was hit over the head with the edge of a riot shield, kicked in the legs multiple times, and had a baton slammed down onto my hand so hard that it is still numb approximately 40 hours later. I was also kicked in the breasts, in the crotch twice, once in the solar plexus, and once in the stomach. I threw up at least once, and was nauseous for hours. I have bruises on both legs, my arms, and my stomach. My ribs and chest still ache.

I had my hands up.

I was pulled out by one of the people with us, after maybe half an hour, and went back to someone’s house – someone who I had only met that night. I was given food, water, painkillers, and safe travel to the place I was staying. That night, other protesters – anarchists and others – took care of me, while police beat the shit out of us.

Written by a member of Bristol AFed currently studying for their A levels.