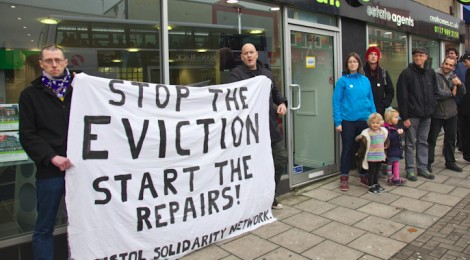 Bristol Solidarity Network (SolNet) has been running for around two years. In that time it has fought unfair bosses, won back stolen wages, sent corrupt landlords packing, confronted harassment in job centres, and supported people through work capability assessments (run by the notorious ATOS and Maximus).

The SolNet has been able to fight – and win – on a wide range of issues because the tactics they use easily adaptable to almost any situation where someone in a position of authority needs to be taught a lesson!  Even just knowing that they are supported and listened to can help people gain the confidence to fight back. From writing demand letters and attending meetings, to calling demonstrations, phone blockades and occupations, the network ensures that those directly effected take the lead in the action.

One family who the network has been supporting came to them after 8 years of constant struggle against a slum landlord who’s name they didn’t even know! Their house had major damp issues, broken doors, almost no insulation and massive cracks in the walls and ceilings. Worst of all several family members had health issues related to the poor condition they were forced to live in. Unsurprisingly the council in Bristol had been useless, and despite making several visits to the property and deeming it a health hazard they stopped short of actually doing anything!

After chatting to the family the SolNet was able to establish what the tenants wanted. Together they were able to write a demand letter to the property manager, delivering it in one large group. This gave the manager a time frame for when the repairs were to be done. When these were not met the SolNet then organised with the family to demonstrate outside the letting agency, with information leaflets and blown up pictures of the property.

After this the Agency backed out of managing the property handed over all the details of the landlord, giving the family and the network the real target for action. To help keep the pressure up in the interim, the council was contacted and asked to look at the property again and made to give a deadline for the landlord to do repairs. This gave the SolNet time to track down the landlord and deliver a set of demands once more, this time detailing the full information about what repairs needed to be done and along with the cost given by three different builders.

When he then tried to evict the family, the network was there to give them advice about the eviction process and bring in the correct people to stop the eviction. With this in hand the family made the decision to sue their landlord at the same time as the SolNet carried on the fight. The family also put in time to help others in struggle as part of the network.

For it’s part, Bristol SolNet launched a nationwide media campaign against the scum landlord. They were able to find several companies that he owned and publish contact details. After a day of getting calls, emails and general bad press the landlord called up Bristol SolNet saying he would do the repairs, and contacted one of the builders to get things working!

Joining Bristol’s Solidarity Network the tenants were able to see first hand how a few committed people can pull a community together to make a big impact. This activity has helped empower everyone involved, giving them the courage to face those that oppress them, and the tools to win.

To get in touch: