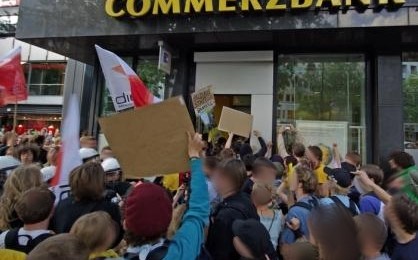 A new form of protest was the large number of (unfortunately only symbolic) bank raids. The Education Strike culminated on Wednesday 17th June in mass demonstrations with more than 250,000 participants in over a hundred towns and cities. The level of repression varied, but there were evictions and numerous attacks with batons, dogs and pepper spray.

Even though the protesters hoped for an alliance with those fighting other social struggles, this wasn’t really successful. Union activists joined the protests (the tame ones, usually with sausage stalls and whistles, and the anarcho-syndicalists with more enthusiasm), but primarily the pupils and students succeeded only in mobilising other pupils and students. This is partly due to the tendency of many protesters only to demand more money for schools and universities. Many would settle for a “wise” and “generous” government, providing them with a differently organised and properly financed educational system. They tried to fight the players (like “evil” bank managers and “stupid” politicians) and not the game, the capitalist-bourgeois system itself. But undeniably there was a massive wave of social unrest and surprisingly large numbers took part in the protests. The radical left was visibly involved and fundamental critique was articulated loudly – not only by the usual suspects.

Although the major demands of the protesters will not be fulfilled, some small changes were realized, e.g. scrapping the practice of attendance sheets in the Institute of Political Sciences in Marburg, achieved following the week-long occupation of the Institute. There, as with the other occupations, protesters claimed a space to organise themselves, to discuss, to work together and to enjoy themselves. They demonstrated that things can change if you kick the system. The trick is to keep kicking till it breaks.

Report by a friend of the AF