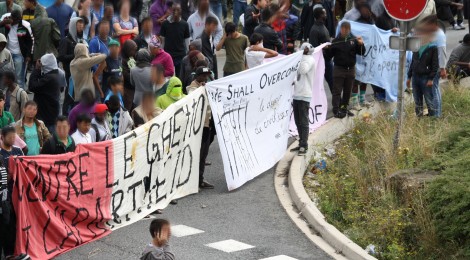 Calais: A Call to Action

It seems as if something in the consciousness of our society has recently snapped. For well over a century the right wing press and the politicians have demonised migrants, labelling them as scroungers and criminals. They confidently repeated their views as the opinion of the majority.

This attitude, the kind behind articles that spoke of inconvenience to British holiday makers as the worst result of a refugee crisis, sat oddly next to other stories that were emerging. Stories of war torn cities in Syria, of boats crowded with desperate families, of millions in Turkish and Lebanese refugee camps, and most strikingly of those who had died on the shores trying to reach safety.

Hundreds of thousands of (mostly working class) people decided that not only that the old attitude was bullshit, but that they were going to do something about it. What followed is perhaps the largest humanitarian mobilisation to occur without the backing, or the need, of the major charities and non-government groups.

Activity sprung up across the UK as working class people became intent on showing their solidarity with migrants stranded in Calais by the government’s border policy. They raised funds, gathered clothes, tents, and other essentials and continue to make there way over with vans of volunteers. Others offered up rooms in their homes to house migrants, donated money, and came out in huge numbers on ‘refugees welcome here’ marches. Further afield aid stations were created on the edge of Europe, and people gathered to welcome and support those arriving by train and bus.

This has been an inspiring show of human empathy, that has gone beyond old models of charity to a genuine show of mutual aid and solidarity across borders. It isn’t just hand outs that are on offer, it is an honest attempt to stand shoulder to shoulder with those forced from their homes. Nowhere is this clearer than on the ground in Calais itself where migrants organising marches against their mistreatment were joined by visitors and locals (pictured).

A real difference is being made, and can continue to be made despite politician’s lies, the anti-migrant crackdown by police across the continent, and the inevitable backlash from dis-empowered racists on the far right. Solidarity is the greatest weapon of the international working class, and with it changes can be won for all of us, wherever we are from.

Be sure to check out: https://calaismigrantsolidarity.wordpress.com/