Browse: Home   /   Battle for the Soul of Pride 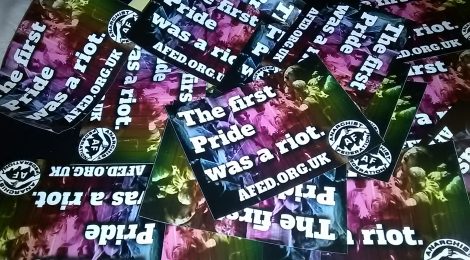 Battle for the Soul of Pride 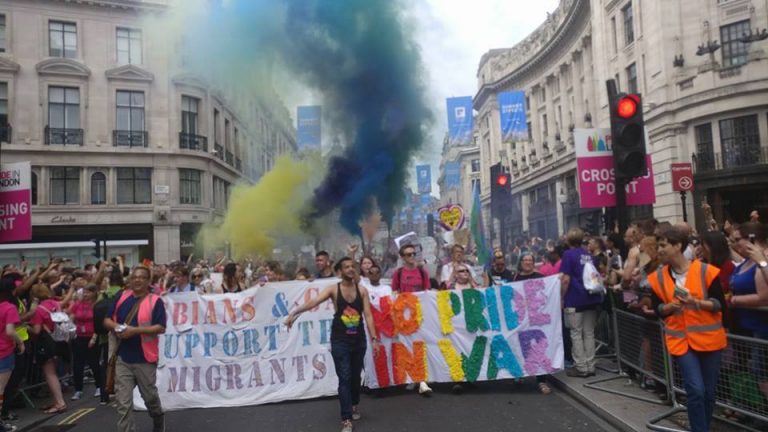 This article initially appeared in the Autumn edition of our paper Resistance, which you can download for free.

In the decades since the first pride marches took place in 1970 there have undoubtedly been massive gains made in the fight against persecution. Pride is, and should always be a celebration. A celebration of diversity, of power and of the gains we have made. It seems however that many of those in positions of power would rather we forgot HOW we’ve made it this far – and how far we have left to go.

The first pride was the anniversary of an anti-police riot. We should never forget this. It was lesbian, gay, trans and queer people (and many of them people of colour) out in the streets of New York fighting for the right to exist. Every step we’ve made since then has been no less of a struggle. We’ve fought the government, we’ve fought major corporations, and fought the worlds largest religions. We’ve clashed with homophobes and transphobes on the streets, in our work places, even within our own families. We’ve proved beyond all doubt that we are powerful, and that we can change the world without any help from on high. This is what they want us to forget.

Pride should be for us, all of us. Everyone one of us that has faced persecution for not fitting into a narrow definition of normal. Normal sexuality, normal gender, normal relationships. So why do we feel like outsiders? Why does pride seem so unrecognisable in many cities. It’s all expensive wrist bands, unaffordable drinks and corporate sponsorship. It’s all tacky merchandise, and rainbow flags hanging from the windows of banks 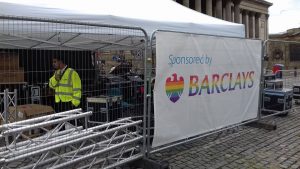 Get in the sponsored cage

Most of all it’s police and politicians. They want us to forget that it’s very possible to be queer and poor. To form an orderly queue and act like a harmless tourist attraction, rather than a movement fighting for justice.  They want us to act like the battle is over. Like they aren’t still KILLING US for being queer. That LGBTQ people aren’t on the receiving end of far more brutality and cold indifference from the state than our straight and cis neighbours. That trans women aren’t forced into men’s prisons, that they aren’t stripped and beaten by the cops. “The struggle is over!” they say, “Buy your vodka, dance for an evening and then life can return to normal”. They’ve forgotten one key thing though – we’ve spent our whole lives fighting against normal.

In London, Lesbians and Gays Support the Migrants took the front of the march from under the noses of the police. In Bristol 100s of anti-police and anti-racist leaflets were handed out by local queers, gearing up to demonstrate against the latest attempt by the far right to use our struggle as a cover for their racism. In Nottingham marchers carried placards opposing prison and deportations, and praising queer and trans people of colour, whilst in Manchester last year the group Direct Action for Trans Health blockaded the police as they attempting to join the parade. Many marchers across the UK also expressed solidarity with Istanbul Pride, the previously large scale march which has been violently prevented by the Turkish police for the past three years. 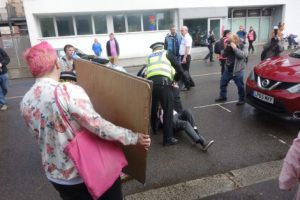 No Pride in Police!

In Glasgow the states claws really came out. The police had been invited by organisers to lead the march. To prove that they really belonged their the cops started proceedings by arresting some anti-fascist queers for their ‘offensive’ banner, before moving on to attack and arrest several LGBTQ people protesting their presence. Glasgow Pride was quick to release a statement, supporting the police. The weeks since have seen an increase in radical organising in Glasgow to support those targeted by the police, and to keep their cities history of radical dissent.

Across the world the battle to keep pride relevant to our past and present struggles remains. To remind people that we’re not ‘putting too much politics in pride’, we’re rallying against those that want to drag the politics out. So however you celebrate next time Pride comes to your town, make sure you never forget where it came from. 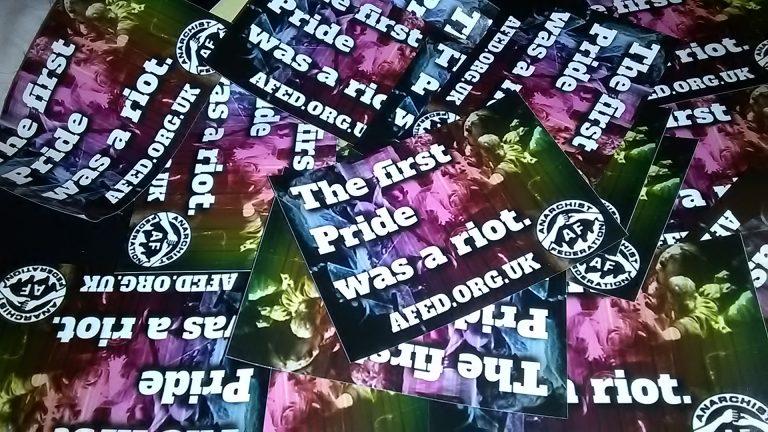