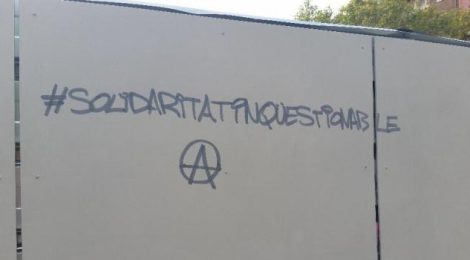 We present three recent articles and communiques from Spain about the Catalonia independence referendum and the general strike (vaga general) of 3rd October (3-O) that was initiated by alternative/base unions. All articles were posted on 3rd October 2017.

General strike against state repression in Catalonia, by a member of CNT

Originally called by a group of alternative unions including the anarcho-syndicalist CNT, who represent the majority of linesman at the Port of Barcelona, the revolutionary syndicalist CGT and Catalan unions the IAC and the COS, the strike is now also being supported by the dockworkers’ Coordinadora as well as mainstream trade unions the CCOO and UGT.

After the 3-O strike, CNT calls for extending the social response

Facing Tuesday’s general strike in Catalonia, CNT wants to show its satisfaction with the response which thousands of workers have given throughout the day and across trades. Popular mobilization responds again against the severe repression which Catalan society is living. Worker’s solidarity shows once again that it can do anything.

1) We condemn unreservedly the brutal police actions ordered by the central government with the support of the Socialist Party (PSOE) and Ciudadanos (Citizens), and which only serves the electoral interests of the PP (People’s Party) and Junts pel Sí (Together for Yes).

2) We completely refuse to support a ‘Process’ inititated and directed by a political caste that is as corrupt and repressive as the government in Madrid and the parties that support it.

3) As a part of the libertarian movement we reaffirm that the objective of anarchism is a world without classes or borders, based on direct democracy and equality.

What is happening in Catalonia is entirely contrary to this: it is cross class and in support of a neoliberal government that is instrumentalising social unrest for its own interests, in the name of an illusory common good and the creation of a new state that would be in the hands of those who previously supported the ‘Regime of ’78’. The demise of neoliberal globalisation has paved the way for protectionism of an identitarian character.

Amor y Rabia considers it fundamental to struggle against capitalism and to concentrate our forces on fighting class society, focusing our activity on the social question rather than the ‘national question’, which turns us into pawns in the internal struggles of rival oligarchies.

‘Changing bosses is not the same as freeing yourself from them’ 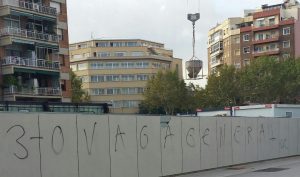