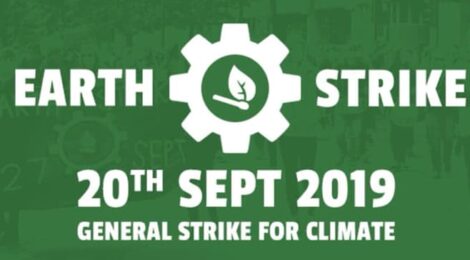 On the 20th of September, around the world, hundreds of organisations are coming together under the banner of Earth Strike to hold a general strike for the climate.

As part of our general activity, some AF members have been involved with Earth Strike UK, either autonomously or via the Green Anti-Capitalist Front/GAF (Wales), and implicit support has been given from the AF during various actions. Now, as agreed by our Federal Delegates Meeting on the 17th of August, the Anarchist Federation endorses and puts our full organisational support behind Earth Strike.

We have agreed that where we have local organisations they will support Earth Strike directly, attend the general strike and share the AF’s solidarity with an active presence. Our members in unions and other organisational fronts will propose backing it to those groups, and those in areas without either a regional of the AF or any other organisation, are considering starting a GAF group, with one of the aims being to build for local actions on the 20th (and indeed beyond).

The international demands of the Earth Strike are simple:

We believe the broad support given to Earth Strike by more mainstream organisations, such as TUC unions, will give more confidence to radical elements within them to organise on a local level. For all of us it gives us a clear aim to work towards, helping to build working class solidarity in workplaces and our communities, and strengthening cooperation amongst activists & organisers.

Earth Strike also makes explicit the links between working class and environmental struggles, at a time when many would prefer we leave the planet in the hands of upper class business leaders and toothless middle class NGOs. We must instead use every opportunity to expand the capacity of the working class and together fight for our planet, and kill capitalism before it kills us all.

We hope you will join us. However, do not wait for us, use your union or local activist group to announce participation in your area. Make it happen.

Anyone can start an Earth Strike collective and take action, whether small or large. The power to stand up for the planet is yours. For more information on how to organise your workplace and community on the 20th, contact ourselves, your local GAF group or Earth Strike UK.

September 20th: General Strike for Climate.
ALL OUT – United behind the science!

• Read the full list of demands from Earth Strike UK

• Look out for an in depth interview with Earth Strike in the upcoming issue of Organise! magazine.