Browse: Home   /   What can Anarchists learn from the EU elections? 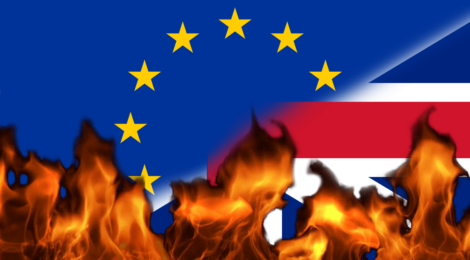 What can Anarchists learn from the EU elections?

An election analysis from someone who spoiled their ballot, proving that if you don’t vote, you can still complain with the best of them.

I’ll start off with a look at the UK, and a sigh of relief that the worst of the worst failed to capture widespread support. In the North West, Stephen Yaxley-Lennon polled so badly that even the Labour/Tory splinter group ‘Change UK’ ended up with more votes in the region. Meaning his only success was as a target for milk based goods. Likewise UKIP, who have in the past year pivoted towards a more openly fascist ‘Alt-Right’ style of politics failed to secure any MEPs. UKIP learnt the hard way that just because a bigot like Carl Benjamin is popular on YouTube, doesn’t mean he’ll be popular out in the real world.

Of course we couldn’t talk about the electoral failures of the right, without talking about their successes. Which all comes down to how this entire election was framed; Referendum 2.0 . Proving that UKIP were always a one man, one issue party, Farage stormed ahead in the polls with his ‘Brexit Party’. The Brexit Party positioned themselves as the only ‘mainstream’ choice for leave voters, doing even better than UKIP had in prior elections. With no manifesto, and a leader who is better than many racists at hiding his racism behind a veneer of ‘respectability’, its hard to say whether those who voted Brexit Party would’ve welcomed the more explicitly far right policies Farage has previously championed, but this could be a real concern if he ever cobbles together a party that can seriously contest a general election.

On the other side of the coin, the Lib Dems, Greens, and both civic nationalist parties (the SNP and Plaid) had positioned themselves as options for the remain vote. The Greens did well, but this may have been less due to their stance on Brexit, and more to do with he increased attention on environmental issues. They did poll equally in both leave and remain areas. Plaid also polled well, coming in second in Wales behind the Brexit party. SNP did even better, with a significant increasing their number of votes by a third, and claiming first place in Scotland. However the big winners of this strategy were surely the Lib Dems. After their disastrous polling in both the 2015 and 2017 general elections, they turned it around in this election as the default ‘neutral’ choice for people who wanted to support ‘remain’ in Referendum 2.0 . Returning from electoral oblivion the Lib Dems scored the second highest number of votes across both England and the UK as a whole.

The big losers of the night were those who currently hold power. That the Tories would do badly in this situation, having made seemingly no progress on Brexit in three years, comes as no surprise. They’ve been on a downward trajectory for awhile, as it became increasingly obvious that their ‘period of austerity’ was designed to be never ending, and that their rich mates certainly weren’t ‘in it together’ with the rest of us. What is impressive though, is how effectively they seem to have dragged Labour down with them. Many people seem to hold the Labour leadership and MPs almost as culpable for the mess of Brexit as the Tories. One thing that was clear, was anything but Labours policy on Brexit. Even when they had one, people either didn’t know about it or assumed it would change soon. As to whether Labour would’ve done better with a stronger Brexit stance or a stronger Remain stance well.. hard to call. Judging by the arguments on social media that seems to be down to whether the individual party member or journalist is pro or anti Brexit already.

Looking at broader trends in the EU, as well as the UK results, it does seem to be a further ‘collapse of the centre’, something which has seen more and more elections globally favour anything but the status quo. The Far Right made big gains in many countries, often off the back of an anti-EU stance, though not to the extent many had feared. Meanwhile it now looks as if the Centre-Right, Centre-Left, Liberal and Green MEPs, may form one ‘grand alliance’ in the EU parliament. Effectively putting all of Europe in ‘Remain’ and ‘Leave’ camps.

So where does this all leave me as an Anarchist? Well, in the incredibly hypocritical position of being so god damn sick of everyone talking about Brexit. Perhaps I’m not alone, with turnout at less than 37% (though EU elections have never done well on this front). Sure, it’s a big issue in politics, but the way everything from newspaper coverage to chats in the pub have gone, you’d think it was the only issue.

Should we as Anarchists be taking an active stance in favour of leave or remain? For one thing I think we’ve rather missed the boat on either, and for another we are taking the only consistent stance we can; Neither Westminster nor Brussels. The EU is a godawful capitalist institution, but the leave campaign is dominated by racism and patriotism. Remaining would be a more secure option for our migrant friends and comrades, but staying means our continued involvement the EU border. One of the most militarised and deadly borders in the world, where the only ‘enemy’ are refugees. Brexit is somewhere between a quagmire and a minefield, and one that has already had every possible opinion, from the extreme to the nuanced, thrown at it, all to little effect.

The thing we should be doing instead, is making sure that those who continue to abandon the centre ground status quo find anarchists waiting. If we’re not there, we will witness both the continued rise of the UK’s Far Right, and a mad dash for the dead-end of social democracy. Anarchist communism is a clear alternative, but only if we manage to show it to people.