Browse: Home   /   Their Brexit, Our Lives and Our Planet 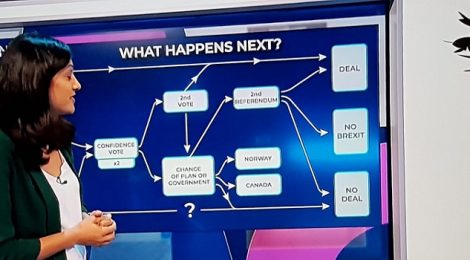 Their Brexit, Our Lives and Our Planet

Personal view from an AF member.

Was there ever a better time to show that our political system is not just unfair and dangerous, but also nonsensical. It’s bad enough that Capitalism puts profit before people, but our economic future – our ability to live and thrive – is being determined by bureaucrats who are making things up as they go along, and lawyers who tell them whether they can get away with it. You know you have gone ‘through the looking glass’ when something like this is offered in all seriousness as helping you understand the situation as it stood last weekend.

And that was before the vote on Tuesday 11th December got cancelled because everyone was set to vote against ‘The Deal’. (Yes, they can do that  – cancel a vote if they think they are going to lose). Theresa May says she is going to renegotiate with Europe what she was absolutely adamant could not under any circumstances be renegotiated and was absolutely the best ‘Deal’ she could possibly get.

Confusion and disorientation is at the heart of Brexit, and we are starting to accept it as normal. If you ask an anarchist how they hope to get to a free and equal society, they’d probably say, “I wouldn’t start from here” and be both joking and serious. It isn’t the fault of anarchists that we get further and further from a situation where working class people can live and thrive freely. We just have to keep it in the front of our minds and as a clearly articulated part of our longer-term analysis.

So, what now? To the centrist, Remainer Right and Left – those who don’t actually relish the possibility of an economic catastrophe, with the rebirth of England (specifically England) from the ashes – the prospect of a second referendum is also a problem. Grass-roots democracy within an electoral system clearly doesn’t work, if a referendum result can be so easily thrown in the dustbin. The response to there even being another referendum, never mind the outcome, shows working class people what the elite really think of us.

But this realisation isn’t fostering working class unity, when the class is so divided over questions of labour, migration and national autonomy along the lines of Left and Right. A major problem with both Brexit and Remain positions is that they are producing cross-class alliances. Some workers seem to be willing to embrace the possibilities offered by the catastrophist elite, as worth it in the long run. And these include some of the left too, hoping for a socialist Brexit; through the looking class again. Other left-wing workers and unions are agreeing with industry bosses, who in general oppose Brexit. A second referendum just demonstrates to many that democracy is a joke, but one increasingly common answer to this is increased authoritarianism and further discrimination and hostility towards people who are already marginalised.

On the other hand, a ‘People’s Vote’ is the only avenue that gives working people any agency at all during the current deliberations. And there is certainly an anarchist case for voting just as there was first time around, especially if it includes the possibility of remaining. A Remain vote, not a soft Brexit, is less of a threat to our internationalism. Liberal-minded people want free movement of people ‘within reason’. But new government commitments to EU people living here don’t reassure EU people living here, even those who have never claimed benefits and have paid taxes, bought houses, have children who speak only English, and even those married to British people. Everything is changing ever five minutes, and any of several likely new Tory Party leaders might roll back what has just been promised. Also, there are more activists in Britain who are EU citizens than ever. We have to protect them as we always have tried to protect non-EU international comrades, not just because we are internationalists but because they are also our comrades, friends and families.

The prospect of a general election is also dire. Labour might be on something of a high internally as it gloats at the state the government is in. But Labour are pro-Brexit too and at the end of the day this still means ‘British jobs for British workers’. As ever, anarchists cannot seriously think that a vote for the supposed ‘Left’ is anything other than handing our decision-making power to friends of Capitalism.

Finally, what of the possibility of Brexit simply dying a death? The lawyers and civil servants said from the start that it wouldn’t and couldn’t work in the way we were told it could, not for ideological reasons but it is simply too complicated to get out of the EU. The Brexiteers have a point about the EU undermining British sovereignty (if that’s what you like). No Brexit will certainly make people trust politicians even less. But will it inspire them towards a better world, or a more reactionary one, given the options and the weakness of anarchism?

But the real reason why we are further than ever from an anarchist society is that Brexit is a diversion from some ultimately far more important issues. One is climate change; as it is, the Remain or Brexit projects only have a couple of generations to run anyway before it’s too late to stop global warming. So where is the environment debate within the Brexit debate? Nowhere. It’s as though the future within Europe and the World is being thought about with a different part of our brains. Unlike the politicians of the harder Left and Right, we have to act with our minds on the future of the planet and its people as well as the immediate and medium-term gains and losses which at present dominate the political discourse.

Brexit can only worsen a situation where people in Britain live and die without shelter or warmth, without the care that they need, dependant on food banks, missing school as children because they can’t afford sanitary towels, not being able to live as the gender they should because of the economic cost of transitioning, or any other of the hardships we have come to accept as normal, but which are actually social crime. Things will get worse before they get better, Brexit or no Brexit. It threatens medical and food supplies. We actually are at that point. Anarchists will rightly spend more time addressing these issues than they do thinking about Brexit, and the work will be even harder after it takes place.

As I said, you wouldn’t start from here. But we are where we are. Whatever the outcome of Brexit, we’ll continue to fight political and legal restrictions to where people can and can’t go, what they can do there, and how they will support themselves. But we also have to force a reversal of climate change in every strategy we undertake, by whatever means we can, if we have any chance at a better World.

So, we have to work on many levels for a World around which the global working class can unite, survive and change for the better, in the medium and long term. Is there a version of Brexit that gets us closer to that? Let us know.

Read another recent post from the Anarchist Federation about Brexit:

Brexit and workers – what’s the score?