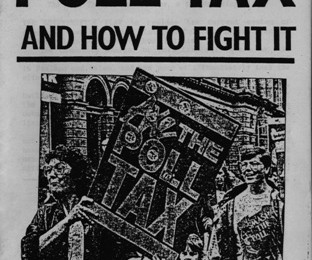 THE POLL TAX AND HOW TO FIGHT IT

The Poll Tax and How to Fight It was the first of two pamphlets we wrote on the Poll Tax, published around October 1988. It encouraged the rise of mass revolt against the Community Charge as it was happening in Scotland, and as it was poised to be fought and beaten a year later in England and Wales as well.