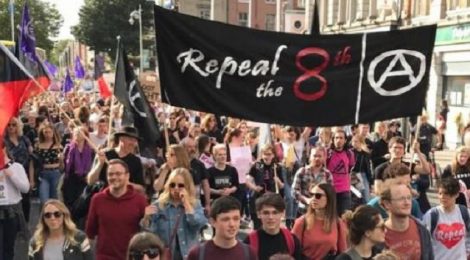 The hated Eighth Amendment repealed. The Right doesn’t always get to win!

W / 29/05/2018 / Comments Off on The hated Eighth Amendment repealed. The Right doesn’t always get to win! / Analysis, Events, History, News 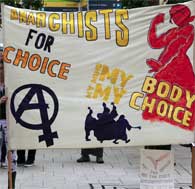 On May 25th 2018 a ballot held in the Republic of Ireland repealed the ‘Eighth Amendment’, which had been added to the Irish constitution in 1983. This held that a foetus has the same right to life as a woman, effectively making it more difficult than ever for women to get abortions.

A woman should have the power to make decisions over what happens to her own body. This Right to Choose is at the heart of Anarchist Communism. The Workers’ Solidarity Movement (WSM), the main Anarchist organisation in Ireland, and the Revolutionary Anarcha-Feminist Group (RAG), campaigned tirelessly for legalisation since they were founded, in 1984 and 2005 respectively. Detailed information about the legislation and the campaign from an anarchist perspective can be found here: [url]https://www.wsm.ie/pro-choice[/url]. We applaud Irish anarchists for what they have achieved in the fight against patriarchy in Ireland, and the difference this makes for all of us.

The Eighth and campaigning against it raises important and interesting points for anarchists beyond a woman’s right to choose being a ‘given’ for us.

This is a class issue as well as a feminist one. Although she shouldn’t have to, a woman with money can at least travel to England to procure an abortion. A woman without enough money faces the prospect of giving birth to a child she did not chose to conceive, or a dangerous illegal abortion. This is well known.

But the misogynist ideology that would deny her this is not just that of the Catholic Church. In the Six Counties of Northern Ireland, it is also the position of the Democratic Unionist Party (DUP), with abortion remaining illegal there through the combined efforts of Catholics and Protestants alike. As such, it poses problems also for the British State. Any attempt to overturn this out-dated and backward anomaly will be opposed by the DUP. They alone give the Conservative Party its majority in Westminster. An attempt by women in the North to make abortion freely and easily available, will probably not be supported by the British state because of this. Ironically, the government will probably say that it does not want to meddle in Ulster affairs, especially while the Stormont parliament is suspended.

Another interesting point is that the WSM and many other anarchists voted in the referendum on the 25th. But anarchists don’t vote, do they? Some purists never do; there is such a thing as dictatorship by the majority, and most anarchists would rather reach a consensus wherever possible in our own organisations. But it is important to make a distinction here between voting for political leaders, which means giving up our individual and class power to a virtually unrecallable and unaccountable representative, and voting for or against a specific piece of legislation. It is a no-brainer to support a ‘Yes’ position to repealing the Eighth Amendment. Here, our vote does have the power to change things for ourselves and for our class.

But it is not quite as straightforward as that. Anarchists are very aware of the implications of winning the vote. We are giving still up some of our power. The Right to Choose in Ireland will now be implemented by politicians and bureaucrats, who will not be working in the interests of working class women, but will be influenced by a condescending type of feminism which works fastest and most efficiently in the interests of feminists with a political voice.

In other words, anarcha- feminists everywhere are pleased that the Eighth Amendment has fallen, but we’ll be keeping a close eye on how effectively abortion services are rolled out in practice in Ireland, and we must be ready to support Irish anarcha-feminists again in future struggles. Furthermore, it is not exactly straightforward to get an abortion even in England, Scotland and Wales, so the battle is far from won here either.