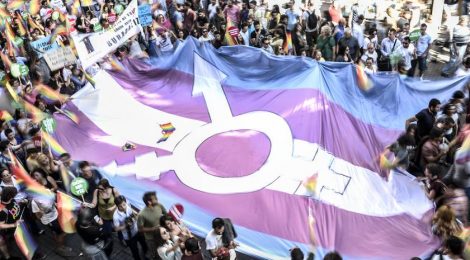 The following statement was originally posted on the Anarchist Federation Facebook page on 20/11/2017 (Transgender Day of Rememberance). A earlier statement was posted on www.afed.org.uk on 30/10/2017 immediately following the transphobic leafleting at the London Anarchist Bookfair of 28th October 2017 and is available here.  Other statements include one by Edinburgh AF which was on their noflag hosted site edinburghanarchists.noflag.org.uk and can be found on ainfos, also published immediately after the bookfair.

The basic human dignity of being able to choose or express who we are should not be an issue within the anarchist movement. Transgender/non-binary people should never be subjected to abuse or mischaracterisation in anarchist spaces/events by TERFs (Trans-Exclusionary Radical Feminists) or anyone else – anarchists do not tolerate bigotry in the guise of free-speech. It is very rarely that anarchists attempt to shut down debate or resort of physical or verbal violence to do so. If trans activists feel they have little choice but to resort to this in an anarchist space/event, that is a crisis for our movement.

The AF regrets that the opportunity has probably been lost to transform the London Anarchist Bookfair – which in recent years has developed into one of the most important and representative anarchist events globally – into an environment where this situation cannot not reoccur. Whilst the right of people to choose their gender identity is not up for debate, discussion about the relationship between different oppressions and their relationship to the wider class struggle are nonetheless important.

The class struggle and the struggles of specifically oppressed groups under capitalism do not run parallel with each other, but overlap. Our movement can only benefit from education and engagement with the issues effecting trans-people in the context of where the overlap happens, just as it must improve and advance its theory and action in relationship to all oppressions.

Where legal reforms will improve the material situation of trans-people under capitalism, workers with gender privilege must support them as part of the wider social and economic struggle. But this can only take place meaningfully in an environment which automatically defends the starting point that we are who we say we are, and where the imbalance of power which we bring into the movement from wider society is acknowledged and undermined as far as possible.

← The world transformed or staying the same? An open letter to Plan C
2018 – In with the new →
Posting....
Skip to content