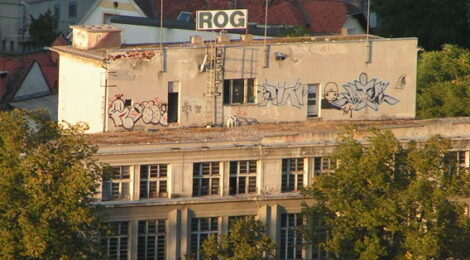 On Tuesday 19th January, on the orders of the Municipality of Ljubljana (MOL) led by Mayor Janković, riot police and a local security company Valina violently entered and evicted ROG, which for the past 15 years has been a vibrant autonomous space in Ljubljana, capital city of Slovenia.

People inside were dragged out and (temporarily) detained. Some were beaten or injured. Demolition equipment was immediately taken on to the site. Belonging of occupants were seized, destroyed or left behind. Bags were searched and phones were seized to try and prevent pictures being taken. Personal savings, documents, computers, cameras, phones, artwork, college notes and bikes were taken. Clothes were strewn on the muddy grounds of the yard mixed with debris such as broken glass created by the invasion. Books were damaged, many left soaked and dirty. Confiscations included arts, musical and professional equipment worth 1000s of Euros. From today people are supposed to be able to turn up and claim some of what was taken, but only if they sign away getting further compensation from MOL for the eviction. Since the eviction no public documenting of the site or inside buildings is being allowed.

The squatted factory (in fact, a large long-time disused bicycle factory of manufacturing company Rog which still produces bikes in Slovenia) advocated solidarity, mutual aid and self-organisation, values that anarchists support and defend. Rog was a space against gentrification and capitalist repression and a hub for cultural activities including artist studios and gallery spaces. It had two skate parks, plus various gig and club venues. And a bicycle repair shop…

Rog was an important space for migrants and refugees, providing vital a day centre and also accommodation for those in need. Migrants and refugees in Slovenia include those who suffered from ethnic cleansing and/or loss of legal status (AKA the Erased) after the break up of Yugoslavia and declaration of Slovenian independence, people originally from the Middle East, Africa and Asia who fled persecution from wars via the ‘Balkans route’, and others who survive and fight as ‘invisible workers‘.

For many years autonomous spaces in the city have been tolerated as semi-legal ‘consensual’ entities. Another nearby space Metelkova, which has a number of nightclubs and a B&B/hostel on the site, is listed as one of the top tourist sites in the city! Whilst under threat in recent years, the 2021 eviction of autonomous Rog for demolition and ‘redevelopment‘ has still come as a shock and so is a very worrying precedent for further repression, especially as there have been attacks on both Metelkova 6 and Radio Student, a radical independent community voice, in the right-wing press.

For the ‘robocops’, as they have been named, to toss people out (separating them from their belongings, and leaving pets behind) and to destroy community resources during the coronavirus pandemic is particularly vindictive. But the local MOL government has come under pressure and criticism during Covid with Friday demonstrations having taken place through much of 2020, defying lockdowns with creative physical distancing, which started off as mass bike rides. All this from a city that recently bid for European Capital of Culture under the banner of “Solidarity”. That failed – and as our comrades have identified, grimly, “All masks have clearly, finally fallen”. More recently a curfew has been put in place in the country as part of the pandemic measures. It is against this backdrop that the State has apparently decided to show the people a lesson. This is no doubt aided by an increasingly right-wing rhetoric from the national government with its attacks on the media and migrants.

There has been a large and quick response from anarchist comrades and others saddened and angry about the eviction. Despite intimidation, with unprecedented police occupation of the city (who during the curfew and at other times are now all over the place) and with continued repression against protests, plus neo-nazi provocations, activists were still able to hold one of the strongest demonstrations in solidarity with Rog on Friday 22nd January. Around 1000 people attended a demo in Ljubljana city centre, which police were unable to repress in a major way (one arrest and and some fines). Campaigners for Rog have also received a huge amount of support and solidarity from all around the world. After the eviction, member federations of the International of Anarchist Federations, including the Anarchist Federation here in Britain, are likewise calling for solidarity actions everywhere.

As our FAO (Federation for Anarchist Organising) comrades in Slovenia are saying, “We understand this fight – that will continue over the coming days – as a fight against gentrification, capitalist colonization of our lives and cities, against police state repression and we aim to build a wide-spread anti-capitalist and anti-fascist front around the issue.” [listen to an excellent podcast of an interview about the current social situation in Slovenia and anarchist response from August 2020].

There is a fund-raising effort to support those who were affected by the eviction, and to continue the fight. Please spread the word and support it.

Use PayPal or make contact about other means of supporting Rog financially at solirog@riseup.net

FB (mainly in Slovenian but with auto-translate that works quite well): https://facebook.com/a.infoshop/