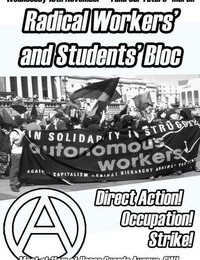 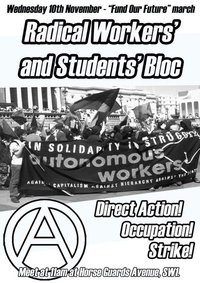 Meet at 11am at Horse Guards Avenue, SW1. [Map]   [Download poster and leaflet]

On Wednesday 10th November 2010 the NUS and UCU have organised a demonstration in London  ‘Fund Our Future: Stop Education Cuts’ in protest against the cuts in education. We are calling on all anarchists and militant workers and students to join us in forming a ‘Radical Workers’ and Students’ Bloc’ on the demonstration, arguing for all those in education to fight the cuts based on the principles of solidarity, direct action, and control of our own struggles – not for a struggle controlled by union bureaucrats and political ‘leaders’ who can only go so far.

The need for workers and students to organise together as one has never been more pressing, and it is us that will be the demonstrators standing our ground in defence of the independent class struggle, against the ‘Left’ which will seek to channel dissent into the election of another Labour government. We push for a widespread fightback based in our workplaces and campuses, as well as in the streets, acting in solidarity with fellow workers and communities fighting these austerity measures all over the world.

We also intend to be a visible anti-capitalist presence on the demonstration pointing out that it is capitalism that has caused the crisis that has led to these cuts, and that in response to their class war we need to reciprocate: meeting cuts with direct action – occupations, strikes and civil disobedience – whilst fighting for a better world which puts human needs first.

Bring red and black flags, banners and propaganda. The student and workers movement needs anarchist ideas and methods more than ever if we’re to beat the cuts.

Meet at 11am at Horse Guards Avenue, SW1.