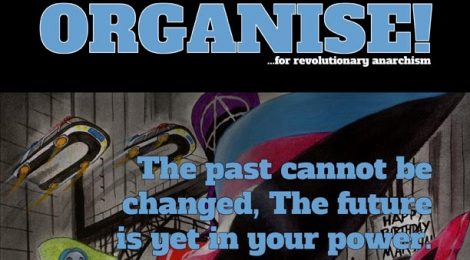 Organise! 90 is out for Mayday 2018 with a whopping 52 pages. Copies will be available in print soon from the usual outlets and online stores and the PDF is available now for free.  Print copies of the last issue (and other back issues) are available from AK Press or Active Distribution and you can also download the last issue PDF.

If you like what you read and want to support us in continuing to produce it, you can donate via paypal here. Thanks! 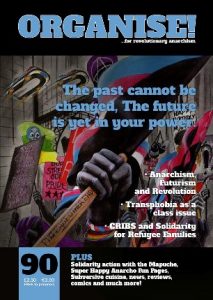 It’s scary breaking out of the shackles we’ve grown used to.

The paradigms and assumptions we’ve cemented into our zeitgeist as a society are often all too comforting and reliable and even for the fearless (and reckless), ready to build the new world, the way forward can seem impossible, the suffocating fear of change, of transition permeates every thread of our community, suppressing and restricting progressive development at every juncture. In this edition of Organise we dip our toes into two very differant forms of transition, the personal and the social and we look at how the fear of new ideas and change is having an impact.

Firstly, we’ve had an explosion in the visibility of transgender and gender non-conforming people, courtesy (I think) of the internet which has seemingly become a bastion for people exploring their gender and identity. This sudden wealth of community subsequently has lead to a beautiful explosion of awareness, analysis and communal exploration of self. Unfortunately that change in conversation has brought around a growth in hostility and bigotry. Trans and gender non-conforming people are being attacked by traditionalists and conservatives almost persistently. This abuse ranges from the monosyllabic hollering of transphobes on the street and the “I AMZ AN ATTACK HELICOPTER HUR HUR” memetic drivel online to the seemingly erudite prattle of Jordan Peterson or pseudo leftist articles from Trans Exclusive Radical Feminists, attempting to mask transphobia behind manufactured fear. Reactionary scaremongering and bigotry seem to be rising at an alarming rate as our society is forced to address it’s ideas and assumptions regarding gender, sexuality and identity.

Secondly, we look into new visions for future Anarchistic societies with ecology and socialism at their core. Whether it’s giant vertical forests or living afloat in seasteaded cities we need alternatives to the concrete jungle, perhaps even in time, out there in the stars aboard space stations and distant colonies. These ideas about how we can make a society that function are themselves constantly attacked and shot down. Traditionalists demand the maintenance of the class system, patriots glorify the inherent value of servitude to the state which alongside the capitalist moguls economically throttling communities and pushing programs of gentrification ensure our cities cannot grow beyond these cold, sterile post industrialist commerical hubs. The seats of the corporate elite, London, Cardiff, Edinburgh and Belfast and the centralised authourity that reside in them continue to make forwarding even the most benign aspect of a progressive society near impossible, chocking the culture of the major cities while logistically crippling others and treating rural communites like holiday destinations to be hollowed out and preserved for those summer retreats.

Some of the wonder has been lost along the way, the brutal reality of trying to survive capitalism is slowly killing our imagination and the dreams of a beautiful society that exists in relative harmony with the environment. We need to remember the world Anarchist Communists have fought for these past few hundred years, a world based on mutual aid and compassion, where people are truly free from the lingering residue from millennia of religious intolerance and the abuses of the nob parasites living off their labour. A world without borders, hierarchy or financial nightmares, A world where the people are free to build their dreams and be who they truly are.

We also have a wonderful interview with Sally from Cribs and articles looking into contemporary fiction and ongoing solidarity campaigns amongst other things which we hope you find useful and enjoy. We’ve tried to sow some seeds, hoping for some change however slight because change isn’t something we need fear. We should be standing proud of our progression we’ve come a long way and we should keep on developing our new world.

Change is something with should be striving for and celebrating it is at the core of the revolution and to building a society which functions and subsequently finding our space and place within it.

Tags: organisation, publications
← New statement on transgender struggles and action – 15/4/2018
Counting us in, counting us out →
Posting....
Skip to content