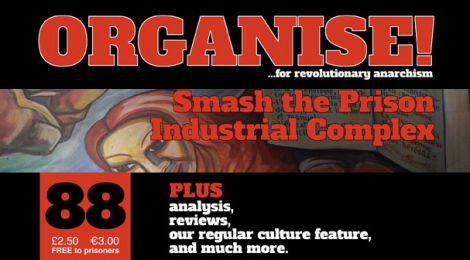 Organise! magazine issue 88 Summer 2017 was out in print in May and is now free to download. Get printed copies online from either Active Distribution or AK Press.

Other features
-Things do not change unless people cause trouble!
-Midlands Anarchists Get Organised!
-News from the Sparrows’ Nest
-Repression of Anarchists in Turkey â€“ Solidarity with Huseyin Civan, Meydan and DAF
-AnarÅŸist Kadinlar â€“ Anarchist Women of Turkey
-â€˜A box of ashes, the state and the next Cuban revolutionâ€™ article by a Cuban anarchist following Castroâ€™s demise
-The Two Octobers
-Omnia Sunt Communia
-Culture Feature â€“ Beer in a Bad State

Even to some within the anarchist movement, prison abolition can sound like an unrealistic demand. However, one of the main principles that sets anarchism apart from other strands of political thought is that we create the world we hope for tomorrow by mirroring it in the actions we take today. Looking at the criminal justice system with this in mind we see a vital component of the state that ensures people are kept dispossessed. It is designed so that anyone who attempts to fight back through strikes and protest will be punished. It’s prisons are full of people who would not have needed to break any laws if the lawmakers hadn’t denied them their dignity in the first place. With this in mind, the only truly anarchist response to the criminal justice system can be total opposition. Thus our theme this issue is to look at prison abolition.

With ‘Brick by Brick’ we are given an in-depth look at what is meant when people talk about the Prison Industrial Complex, as well as the strong arguments in favor of a practical prison abolition movement. We also have several pieces detailing that movement: ‘The Empty Cages Collective’ give their perspective on opposing the British prison system, ‘Care Not Cages’ was written for the International Day of Solidarity with Trans Prisoners by a member of Action for Trans Health, and we have an update on the work of the Anarchist Black Cross in Belarus as they deal with the fallout to mass civil unrest in ‘Opposing the ‘Social Parasite’ Tax’. Finally, we have a short directory of groups and campaigns that are active today that we hope you feel inspires to get involved with.

Given the theme, many of the articles in this issue will deal with prisons, policing and systemic oppression of specific groups. Sources will include references to violence including police brutality, racism, incarceration, prison deaths, self harm, suicide, poverty, assault and sexual violence.

Going beyond the theme we have LOTS more, including an amazing selection of reviews, a piece written by anarchist comrades in Cuba on the death of Castro, and a culture piece thinking on the ways in which the State and capitalism have effected the production of beer throughout the years. Also, if you have anything that you would like to submit to for our Autumn/Winter issue then our inbox is open for contributions.