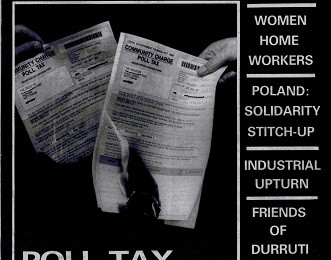 The articles can be found via links below or from here: http://www.afed.org.uk/org/polltax/

We have also scanned in the first of our two pamphlets about the revolt: The Poll Tax and How to Fight It published in 1988, supplementing Beating the Poll Tax the text of which we put online sometime ago along with its original cartoons. These can be found in the pamphlets area of our website.

Note: all links are to single page image files in the GIF format which are all around 0.5MB each so they will be readable online but at the same time not too big. Click image or use zoom facility on browser to read online, or download and print. Some articles are over multiple pages.

All articles, except letters, written by the Anarchist Communist Federation, now AF http://www.afed.org.uk/

If you’ve been following media reports on the 25th Miners’ Strike anniversary closely enough, you may have heard mention of how the state had, since the mid1970s, carefully planned for working class revolt in the steel and coal industries. They did this by stock-piling coal and increasing reliance on nuclear energy and oil as fuel, attacking trade unions and hiring nonunion labour, and introducing a “mobile squad of police equipped and prepared to uphold the law against violent picketing” -also known as the riot police! All these things were used against the miners during the 1984 strike. This is a prime example of state forward-planning against the political threat of ‘communism’ and working class resistance.

Five years after the Miners’ Strike the Thatcher government was feeling confident, and wanted to change the way local government was funded. To do this they would get rid of the housing rates (paid per house with an amount depending on its value) and introduce the Community Charge, a flat rate per person – which quickly became known as the Poll Tax. The revolt against it is now legendary. Most importantly though, this is one of the best examples of our rulers finding out that their subjects can also plan ahead!

From April 1989, Poll Tax bills were to be sent out in Scotland a year before it came to England and Wales, and registration forms were to be delivered south of the border. But in the months leading up its introduction in Scotland, activists (including anarchists and socialists) had been hard at work canvassing support for a mass non-payment campaign. Instead of any real attempt to oppose the ‘Tory Tax’ the opposition Labour Party, with its many councils afraid of the damage to their funding base, had launched the non-political ‘Stop It’ campaign, which was expressly against ‘illegal’ non-payment. On the ground though, things were very different. While registration forms were being burned in the street, Eric Milligan, head of Lothian (Edinburgh) region Labour council’s Finance Department was on the attack, saying in April 1989, “As a socialist, I have no time for tax-dodgers”.

Likewise, although there was some excellent action from workers, trade union response to the Poll Tax was mealy- mouthed and out of step with the anger of residents who could not and would not pay the new tax. Benefits workers refused to act as ‘snoopers’. Manchester postal workers took unofficial action, refusing to sort registration forms for delivery. Sadly, the action later collapsed in the face of both union and management opposition. But at the same time, council officials were having doors slammed in their faces and were being chased off the streets. The popular revolt came as a huge shock to Labour, and in December 1989, Eric Milligan was forced to concede, “Such is the scale of the non-payment movement in our region that we may have to write-off large sums of outstanding poll tax.”

What had made the anti-poll tax campaign so successful was not the standard methods of the Left -trade unionism, workplace-only action and sucking up to Labour, but community self-organisation that had begun as early as 1987. The demand “Don’t Collect’”by councils had mostly fallen on deaf ears and it was the “Don’t Register” and “Don’t Pay” slogans that had found a resonance. Door-to-door leafleting and public meetings explained just how many people were not paying, and that you could join them! Anti-Poll Tax groups were being set up not just one per town, but many per neighbourhood. In October 1988, six months before the registration deadline in Scotland, there were already 23 local groups in Edinburgh and 31 in Glasgow, and in a MORI poll, 42% of people said they would support a non-payment campaign. Not only that, but Scottish groups started visiting newly formed anti- poll tax groups in England to spread confidence and tactics, and vice-versa. So by the time the bills were sent out in England and Wales, we were more than prepared to fight and win.

Our communities will need to find this kind of strength again. While councils are beginning to cut services and jobs, the threat of massive council tax increases are just around the corner. Furthermore, in Scotland, council authorities are still pursuing individuals and even partners of Poll Tax non-payers, using tactics like freezing bank accounts. The key lesson from the Poll Tax is that local councils are not our friends, especially when the going gets tough economically. So, as more and more people become unable to pay bills, at the same time as supporting and encouraging workers who are preparing to fight job cuts and wage freezes, we must plan to fight council bureaucrats, courts, snoopers and bailiffs.

War on the Streets in Armenia →