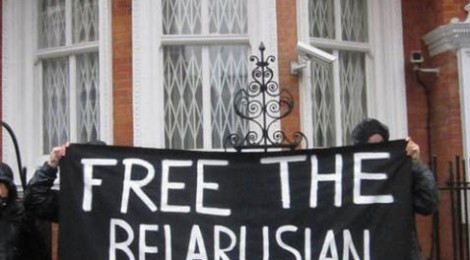 AFed / 28/09/2012 / Comments Off on One Belarus comrade released – solidarity works! – 5 to go / News
New message about Belarus prisoners – 1 released, 5 to go.
Obviously this may be partly game-playing from the authorities since Pavel is
one who signed for the pardon, but no matter, coming just days after the demos
on 22-23 September 2012 this is a great result. Solidarity works. Until all are free ….
See photos from London, Paris and Rome demos.
—

We’re glad to announce that after 620 days in prison Pavel Syramolatau was released from prison by president pardon on September 27th. Pavel was arrested on January 17th 2011 due to attack on KGB building in Bobruisk, which was announced as solidarity action with anarchists arrested in Minsk in September 2010. In may 2011 after more than six months of investigation he was sentenced to 7 years in prison. Their action were classified by court as destruction of private property.

Under pressure of colony administration he signed petition for pardon this June.

Currently five more people supported by Anarchist Black Cross are in prison: Artsiom Prakapenka, Jauhen Vas’kovich, Ihar Alinievich, Aliaksandar Frantskievich and Mikalai Dziadok. All of them are strongly against petitions for pardon and ready to spend all of the sentence in the prison, rather than asking president for release.

You can express words of solidarity to Pavel and the other by emailing them to belarus_abc [at] riseup.net
—