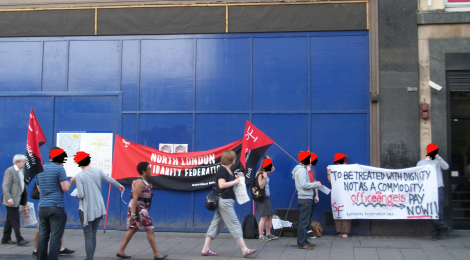 As it stands the money still isn’t with Dan. We are hoping to escalate this campaign and would advise employees with grievances against Office Angels to get in contact with the Solidarity Federation on southlondonsf [AT] solfed.org.uk.

For latest developments in the campaign check out this thread on the libcom forums. Remember, solidarity is strength!

Solidarity Federation are organising a campaign against this agency after an ex-employee asked for our assistance. Dan worked for Office Angels for three days in December of last year. He was assured by the company that the lack of a time-sheet would ‘not be a problem’. However, Office Angels are refusing to pay him the wages he is owed – falsely claiming he only worked for one day, despite them having called him at work on his third day. After completely ripping him off, they had the nerve to harass him for seeking advice on an internet discussion forum.

Temporary workers face similar unacceptable conditions every day. They work without sick pay or maternity leave, are vulnerable to unfair and instant dismissals and have no union support. Rising unemployment and a bleak economic climate will force even more of us to accept these precarious conditions – yet another example of working class people being exploited by an economic system that only benefits the rich.

The best way to improve our conditions at work and in our communities is by standing together and resisting. We want to hear from any current or previous Office Angels employees that have come into conflict with this company and its culture of disrespect. We know that this is not an isolated incident and the more people get involved, the more pressure we can put on the company to start treating its workers properly.