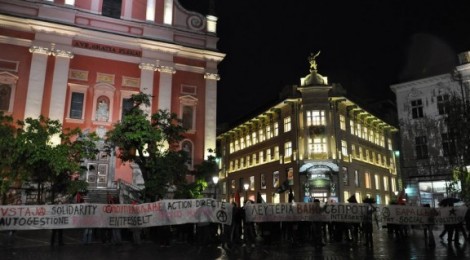 Joint statements, radio and video from the Balkan Anarchist Bookfair 24-26 May 2013

The 10 year Balkan Anarchist Bookfair took place on May 24th-26th 2013 in Ljubljana, Slovenia.

Here are three statements created collectively during the bookfair, plus a great internationalist video:

1)  We are their crisis – for a transnational struggle against capitalism and repression! (from general assembly of the bookfair on Saturday 25th May – includes video of an action in the city in the evening).

3)  Building solidarity and resistance against capitalist devastation… (from the General assembly of the participants of the Balkan Anarchist Bookfair 2013 on 26th May).

Listen to: Radio show – English edition of Črna luknja, the local voice of anarchism on Radio Študent after the Balkan Anarchist Bookfair

Photograph of the internationalist action in Prešeren Square (Prešernov trg) over from the Triple Bridge (Tromostovje), Ljubljana city centre during the Balkan Anarchist Bookfair, 25th May 2013.