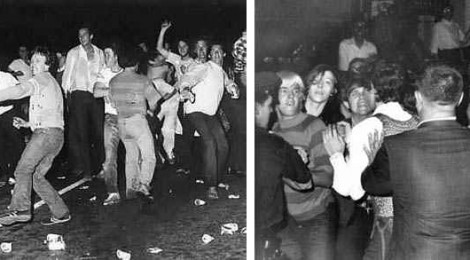 [This piece was followed up with ‘An Apology to Free Pride (and some hopefully constructive notes)’ by the same author, who suggests reading both together.]

The first pride event was Christopher Street Liberation Day. It was held one year after the Stonewall Riots and aimed to bring together an oppressed community to rally against the forces of the state and capitalism that were keeping them down. Fast forward to Glasgow in 2015 and our pride event (in August, whatever), has stalls confirmed from such members of “the community” as:

Pride went so far astray due to the idea that everyone should be included on the basis of their identity alone. Lesbian bosses who exploit others? They can march. Gay politicians? Let them speak. Gay Police Association and corporate sponsors? We couldn’t do anything without you. Oh, and don’t forget the allies. This gets stretched to the point where in London the pseudo-fascist UKIP were allowed to sulk back onto the march by organisers after being given a cursory ban (in what looks to have been a lie told to  defuse any attempts to eject them from the march).

The biggest problems we face are realised in crippling poverty and the prison system. These will never be addressed (let alone solved) pink-washing the division between the exploited classes and the ruling classes that benefit from our oppression. As the methods we use now will be a reflection of the end point we reach, methods that gaining privileges for a few will always be based on deepening the exploration of others.

So what was it about the Glasgow event’s betrayal of the ideals of Pride is the Glasgow queer scene most offended by? What has driven a group to action? Was it violence, poverty, imprisonment, exploitation, torture…?

It was the fact that you have to pay to go to the event.

They call their alternative Free Pride. More like Cheap Pride.

A place where they will likely show films about Marsha P Johnson and Sylvia Rivera (and perhaps, just maybe, someone will mention Brenda Howard, though I doubt it), but nobody will think that they need to take the same path as these pieces of “our” history. They won “their” fight, surely, because today’s fight is just to have a free event…

Some folks will go along with it thinking that at least some of the radical history will take root where it is needed, but in all likelihood Free Pride will take place on a university campus or art crowd space that is so alien to the queer struggles of today that it might as well be taking place on the fucking moon.

Another Pride: Where friendly faced (and well paid) politicians and union bureaucrats will be welcomed.

Another Pride: This time only inviting the ‘nice’ capitalists.

Another Pride: The same as the first Pride, just that ‘they’ cost money and ‘we’ are free.

And I know a lot of the folks involved have their hearts in the right place. I just think there is a collective denial in some as to how bad things are and a near purposeful avoidance in others; because to tackle the real problems would mean confronting their own assimilationist positions. The lessons that have led to the failure of current Pride events are being ignored and the same paths followed; some under the impression that it will lead to different results, others quite happy that liberation will never be given anything more than lip service.

That said we can work out the ways oppression and exploitation attack us. We can act in solidarity with those who find themselves sidelined most in these struggles. And we can build the tools to liberate ourselves together.

From here on in that’s the way I’m going to remember Christopher Street Liberation Day.