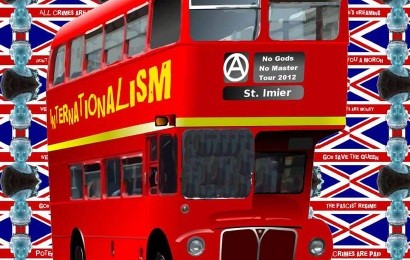 PRINTED COPIES AVAILABLE. Order single issues and subscriptions by post. All back issues are online, some also in print from AK Press. Download PDF for free: http://www.afed.org.uk/org/org79.pdf or order online from Active Distribution or online from AK Press. Please consider subscribing and/or donating to our press fund.

Editorial: What’s in the latest Organise!? introduction to the Jubilympics Antidote special issue

This issue of Organise! focuses heavily on the international anarchist event at Saint-Imier that took place in August this Summer. It marked the 140th anniversary of the founding of the first Anti-Authoritarian International, and was therefore the birthplace of formal anarchist organisations co-ordinating internationally to bring about a free and equal society.

Around 3,000 anarchists took part. We were made very welcome by the town, which values its anarchist heritage and has put up plaques to commemorate it. As is in fact usual for anarchists, contrary to what they say about us, we left it as clean as we found it. The event was well organised by the French Anarchist Federation (FAF) and the Swiss group Organisation Socialiste Libertaire (OSL). The AF is hugely grateful to them for their immense hard work both before the event and during it. It was all very eventful, as you will read, but mostly positive! As it was put at the event’s closing meeting by a member of Anarchist Front from Macedonia, who came to Saint-Imier with us, “Anarchists, the flame in your eyes brings warmth in my heart!” Parallel with this anniversary event, the International of Anarchist Federations (IAF-IFA- ФАБ), of which the AF and the FAF are members, held its ninth Congress since its foundation in 1968 (they are held four-yearly when conditions allow, in addition to our twice-yearly delegate meetings, called CRIFAs).

The AF itself gave presentations as part of the Saint-Imier anniversary event in the opening meeting, in one ‘roundtable’, and three meetings which we organised ourselves. We spoke representing IFA at two further round tables and at the closing meeting. We are reporting back on our experiences and conclusions here through various types of article. IFA at Saint-Imier reflects on IFA’s involvement in and observations on the wider anniversary event as well as our Congress, and concludes with the statement made by IFA as our invited contribution to the Saint-Imier closing meeting, and which the AF was involved in drafting. We also publish texts of two of the four presentations that the AF gave: ‘Neither Insurrectionism nor Reformism, but Anarchism’ and ‘Anarchism in Practice Today’. Both of these talks were based on discussions the AF had at its annual Conference earlier this Summer.

Saint-Imier Snapshots are briefer perspectives pieces by an AF anarcha-feminist and a self-identified ‘younger comrade’. We also reproduce 4 of the 12 sets of Statements published by IFA, including in solidarity with our imprisoned Belarusian comrades, who remained in our minds throughout the event and for whom we are undertaking solidarity activity. In ‘Prefigurative Politics and Self- Management Practices: Saint- Imier and Beyond’, we reflect on questions of self-organisation and individual responsibility in anarchist gatherings in the context of what can happen when things go wrong. We also welcome an article contributed by Brian Morris, The Legacy of Saint-Imier.

We also bring you two AF perspectives, one on Greece and an additional, extended piece on Occupy.  Our ‘culture’ article, this issue features Jules Grandjouan, credited with being the first artist to produce an illustrated political poster. A reader has also contributed a review of a new book by Bob Bushaway (Rite: Custom, Ceremoney and Community in England, 1700-1880). In addition, we received another very interesting and important document from René Berthier of the ‘Cercle d’études libertaires– Gaston-Leval’ which we don’t have space to reproduce this issue. It is entitled ‘About Platformism, synthesism and the “Fontenis affair”’ and, like Brian Morris’, anticipated the Saint-Imier event. We hope to publish an edited version in Organise! # 80 and make a response. It helps us to understand the attitudes of some members of our own International to ‘Platformist’ anarchism better. It also puts in context some rather unpleasant events at Saint-Imier that we experienced.

Whilst we enjoyed and benefitted from almost all of our encounters with groups connected to Anarkismo.net, which co-ordinates Platformist anarchist groups and federations, we wish to note that an overly influential member of its Swiss affiliate (the OSL), Aristides Pedraza, sought actively to undermine IFA’s contribution. For example, he abused his position as a ‘neutral’ chair of Roundtable events in which IFA had been invited to put up speakers, by placing us last and cutting our speakers off before the allotted time of 10 minutes was up. The second time this happened, our speaker pressed on for the full 10 minutes, to great applause! Later in this eventful meeting Pedraza was ‘custard-pied’ by someone we do not know. This was a shocking event to witness. We learned that it was in opposition to Pedraza’s past as an advisor to Josef Zisyadis (Zisyadis held several governmental positions including head of the Department of Justice, Police and Military Affairs in 1996-8, when Pedraza worked for him) and because in 2003, as a leading light in the anti-G8 committee at Lausanne, Pedraza said he was ready to steward the forthcoming demonstration with his own people to prevent “casseurs” (wreckers) highjacking it. These issues have naturally caused a lot of problems inside the OSL itself and are not at all typical of Anarkismo. The AF raises them in a positive spirit so that ‘authoritarian’ forms of organisation are confronted and do not go unchecked. Anarchists don’t have authority figures!

To order a printed copy see details above.