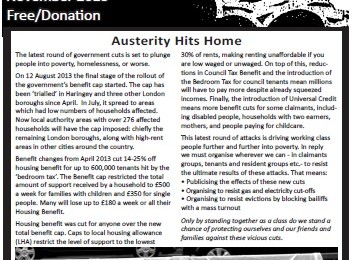 The latest round of government cuts is set to plunge people into poverty, homelessness, or worse.

On 12 August 2013 the final stage of the rollout of the government’s benefit cap started. The cap has been ‘trialled’ in Haringey and three other London boroughs since April. In July, it spread to areas which had low numbers of households affected. Now local authority areas with over 276 affected households will have the cap imposed: chiefly the remaining London boroughs, along with high-rent areas in other cities around the country.

Benefit changes from April 2013 cut 14-25% off housing benefit for up to 600,000 tenants hit by the ‘bedroom tax’. The Benefit cap restricted the total amount of support received by a household to £500 a week for families with children and £350 for single people. Many will lose up to £180 a week or all their Housing Benefit.

Housing benefit was cut for anyone over the new total benefit cap. Caps to local housing allowance (LHA) restrict the level of support to the lowest 30% of rents, making renting unaffordable if you are low waged or unwaged. On top of this, reductions in Council Tax Benefit and the introduction of the Bedroom Tax for council tenants mean millions will have to pay more despite already squeezed incomes. Finally, the introduction of Universal Credit means more benefit cuts for some claimants, including disabled people, households with two earners, mothers, and people paying for childcare.

This latest round of attacks is driving working class people further and further into poverty. In reply we must organise wherever we can – in claimants groups, tenants and resident groups etc.- to resist the ultimate results of these attacks. That means:

• Publicising the effects of these new cuts

• Organising to resist evictions by blocking bailiffs with a mass turnout

Only by standing together as a class do we stand a chance of protecting ourselves and our friends and families against these vicious cuts.

Massive demonstrations by antifascists rocked Greece last month following the brutal slaying of Pavlos Fyssas, known by the stage name Killah P. Last month 34 year old Fyassas was stabbed in the chest outside a cafe in the Keratsini district of Piraeus, shortly after midnight, and died in Tzaneio hospital early the following morning. His attacker, a member of the Neo Nazi Party Golden Dawn, appears to have carved part of a swastika into his body. In response to this shameless murder, big anti-fascist rallies took place across Greece, joined by trade unionists, activists, anarchist groups, left-wing parties and anti-racist organisations. In Athens alone approximately 50,000 turned out to oppose the Golden Dawn.

But once the protesters reached the Athens HQ of the far-right party, riot police threw tear gas at the crowd. Police chased demonstrators around the city centre, detaining around 20 protestors – more were arrested on the corner of Kifissias and Alexandras avenues by motorcycle mounted ‘DELTA force’ officers. A total of 62 people were arrested. To many, this was unsurprising – the Greek police are notorious for their fascist sympathies, and often launch brutal crackdowns on anti-Golden Dawn demonstrations. Anti-fascist demonstrations were held also in other cities around Europe, such as London, Florence, Amsterdam and Barcelona.

These events incited public outrage, with many feeling the Greek government had turned a blind eye to acts of racist violence perpetrated by the far-right. But the ruling coalition, under the pressure of public outcry ordered an investigation into the Golden Dawn resulting in the arrest of several MPs along with party member Giorgos Roupakias, who was charged not only with Fyssas’ assassination, but also a series of other crimes, including manslaughter, tax fraud, tax evasion, sex trafficking and money laundering. Furthermore, illegal weapons, maps and addresses of immigrants and activists – as well as portraits of Hitler and Mussolini – were found in the apartments of arrested Golden Dawn activists and MPs. In addition, eight senior police officers suspected of having strong links with Golden Dawn were forced to resign.

The party has grown substantially with the deepening of the economic crisis in Greece, receiving 6.8% of the vote in last year’s elections, but the assassination of Fyssas and the resulting backlash have seen a massive decline of the party’s popularity. Nonetheless, they remain a significant threat to the immigrants and leftists who are their main targets. The struggle against Greek fascism continues.

The Trussell Trust, responsible for 400 food banks across Britain, recently revealed that it handed out food to more than 350,000 people between April and September this year. A third of those were children, and a third needed food following a delay in the payment of benefits. The trust went on to say that the situation was so bad that some people were handing back food because they could not afford the energy to cook it.

The number of food banks has doubled in the last year, but the number using them has trebled. One of the problems aggravating the situation is the increasingly harsh benefit regime. Chris Mould, the Trust’s chairman said that “We’re talking about mums not eating for days because they’ve been sanctioned for seemingly illogical reasons or people leaving hospital after a major operation to find that their benefits have been stopped or delayed”.

FareShare, a group which supplies food to more than 1000 charities in Britain said that It said requests for its services had risen by 15% over the last year. With food prices continuing to rise whilst wages and benefits fall, the situation may well get worse in coming years.

5. “Struggle Is Not a Crime!” Brazilian Anarchists Stand Firm Despite State Repression

In Brazil anarchist groups are under increasing pressure after recent events: in Porto Alegre the social centre Moinho Negro (‘Black Windmill’) was invaded by the federal police who took books, computers and mobile phones. In Rio de Janeiro two anarchist web sites have been investigated and the sites’ administrators detained.

For its part Interpol is carrying on investigations in Rio de Janeiro and appears to have drawn up a list of social movements in other countries it intends to criminalise: USA, the UK, France, Mexico, Italy and Portugal. It is quite clear they are planning to globalize this persecution.

A search warrant received by a Brazilian comrade reveals that their phone calls have been monitored since July 4th. The activist was asked to reveal his relations with “criminal gangs practicing terror against the State”.

Despite all of this, the anarchist movement in Brazil remains defiant. In a statement the Anarchist Federation of Rio de Janeiro pledged to “continue doing what we always do: organizing and building strong popular, autonomous and combative movements. Mass struggle and popular organization to fight the oppressors! Struggle is not a crime!”

Hundreds of thousands of textile workers near Dhaka went on strike in late September demanding a near-tripling of their monthly wage. The workers last received a pay rise in 2010 and in response to a derisory wage offer by the employers began a wave of strike action.

Strikes broke out at first in scattered areas but then spread to the main industrial centres. 200,000 workers demonstrated in the Gazipur district. In the following two days the employers attempted to open factories but failed, despite threats from government ministers and the collaboration of the trade unions.

The following day more than 100 factories had come out on strike. Thousands joined demonstrations and were attacked by police and the paramilitary Border Guards with tear gas and rubber bullets. Workers fought back by throwing stones. In one police attack 50 demonstrators were injured.

Clothing workers in Bangladesh are the lowest paid in the world, despite working ten to sixteen hours a day, six days a week, in notoriously unsafe conditions. A recent factory collapse caused the deaths of over a thousand workers, causing international outrage.

A New York anarchist has been imprisoned for refusing to testify before a federal grand jury about his political beliefs, his friends and the legal support he provided to the Occupy Wall Street movement. 24-year-old Jerry Koch was subpoenaed before a grand jury that is investigating an explosion outside a military recruitment centre in Times Square in 2008. The blast damaged only the front door of the centre and no one was injured, but the FBI have since begun a witch hunt of local anarchists.

Koch isn’t accused of this or any other crime – prosecutors told his lawyers that they think he was at a bar in 2008 or 2009, after the bombing, and that someone else at the bar knew about another person who was involved.

Grand juries have been used for decades as a means of gathering information, not necessarily about serious crimes, but about the actions of social movements from the Black Panthers, to environmentalists, to anti-war activists. Grand juries are secretive by nature. Prosecutors won’t even acknowledge if a grand jury exists, let alone say what is being investigated. When you appear before a grand jury, you don’t have the right for your attorney to be present. Nor can you assert your First Amendment and Fifth Amendment rights and refuse to talk about your politics, your friends, or yourself. If you do, you can be held in contempt and thrown in jail until you cooperate.

Koch’s imprisonment is the most recent case in a range of raids on anarchists and other radicals. He has now been in New York’s Metropolitan Correctional Center for five months without any charge.

Write him a letter of support today: