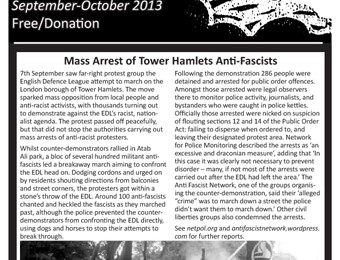 7th September saw far-right protest group the English Defence League attempt to march on the London borough of Tower Hamlets. The move sparked mass opposition from local people and anti-racist activists, with thousands turning out to demonstrate against the EDL’s racist, nationalist agenda. The protest passed off peacefully, but that did not stop the authorities carrying out mass arrests of anti-racist protesters.

Whilst counter-demonstrators rallied in Atab Ali park, a bloc of several hundred militant anti-fascists led a breakaway march aiming to confront the EDL head on. Dodging cordons and urged on by residents shouting directions from balconies and street corners, the protesters got within a stone’s throw of the EDL. Around 100 anti-fascists chanted and heckled the fascists as they marched past, although the police prevented the counter-demonstrators from confronting the EDL directly, using dogs and horses to stop their attempts to break through.

Following the demonstration 286 people were detained and arrested for public order offences. Amongst those arrested were legal observers there to monitor police activity, journalists, and bystanders who were caught in police kettles. Officially those arrested were nicked on suspicion of flouting sections 12 and 14 of the Public Order Act: failing to disperse when ordered to, and leaving their designated protest area. Network for Police Monitoring described the arrests as ‘an excessive and draconian measure’, adding that ‘In this case it was clearly not necessary to prevent disorder – many, if not most of the arrests were carried out after the EDL had left the area.’ The Anti Fascist Network, one of the groups organising the counter-demonstration, said their ‘alleged “crime” was to march down a street the police didn’t want them to march down.’ Other civil liberties groups also condemned the arrests.
See netpol.org and antifascistnetwork.wordpress.com for further reports.

Residents of Balcombe, West Sussex have been at the forefront of the battle against hydraulic fracturing (‘fracking’) in the UK after a community blockade turned into a national protest against extreme energy. Resistance to fracking in Balcombe goes back to August 2012 when energy giant Cuadrilla Resources proposed test drilling nearby. Locals got together and held a picnic to show their opposition to their plans, sowing the seeds for further resistance.
Activity heated up after the Environment Agency granted Cuadrilla a license to drill in July, as hundreds of people from all over the country blockaded the area, preventing Cuadrilla from bringing in equipment.

No Dash For Gas announced that their Reclaim The Power action camp would take place at Balcombe. The media and Cuadrilla were fuming at the prospect of over 500 climate activists descending on the site as it started on 16th August, with activists setting up shop a short distance from the drilling platform. The campers held workshops and practical skill-shares such as the legal rights to protest and being a legal observer. ‘Solidarity Sunday’ was the biggest day, with over a thousand people marching from Balcombe to the drilling site.

Monday saw direct action across the region as activists spread from the camp to attack the extreme energy industry. Protestors occupied Cuadrilla’s Lichfield HQ, forcing the police to break in the back and arrest them. Others protested outside the offices of PR company Bell Pottinger in Central London. Meanwhile, activists from Disabled People Against the Cuts successfully blockaded the main gate to the site.

Anti-fracking in Balcombe continues with daily protests outside the drilling platform. The original camp set up at the road side is still standing and more people are always welcome. To find out more visit the Great Gas Gala website: www.greatgasgala.org.uk. For more information on hydraulic fracturing check out Frack Off! at www.frack-off.org.uk.

Recent weeks have seen the Seattle Solidarity Network achieve two notable victories for tenants and workers, proving once again that direct action gets the goods.

Firstly, FPI Management, a large real estate company whose business extends over several states, were forced to pay back a stolen deposit. A tenant at Tressa, a north Seattle apartment complex, had moved out of his home along with his family. He was informed that a $60-$70 deduction would come out of his deposit to cover general cleaning. Yet Tressa withheld a staggering $388.44! This was justified by a bogus claim that they had to replace an entire carpet in the property, alongside a manufactured photograph of a filthy carpet purporting to be from his apartment.

After considering taking legal action, the tenant’s brother decided to put his faith into direct action and contacted SeaSol. After peppering FPI owned properties in the area with ‘DON’T RENT HERE’ posters, SeaSol learned that this exploitative practice was common practice for FPI.

Unfortunately for the landlords, SeaSol’s actions coincided with the first International Solidarity Network Conference, in which fifteen delegates from Solidarity Networks across the country gathered to share experiences, skills and plan for the future. Consequently, what began as a small picket targeting one of Tressa’s offices grew to a boisterous and colourful action that drew nearly fifty people in support of the tenant and his family. One week later, he received a check sent via overnight mail for the remainder of his deposit.

One of SeaSol’s newest members was an employee at a supermarket in a shopping centre in Washington. There he faced constant and brazen exploitation by his bosses, spending two years working 6 days out of 7 for a combined total of 72 hours a week. He was not allowed a break, was refused overtime pay and was paid far below the state minimum wage.

He contacted SeaSol and the network voted to fight for thirty weeks worth of back-wages.
In July, the worker, his family, and nearly fifty fellow SeaSol members entered the store in solidarity and made their demands. The bosses were so intimidated by this show of unity that they responded by conspiring with a lawyer to try and persuade him into accepting less money.

But the worker and SeaSol never wavered in their commitment. When the bosses and their legal advisers realized that they couldn’t intimidate him and his new comrades into accepting anything less than he was entitled to, they caved in immediately and paid up the full thirty weeks’ worth of wages on the spot. A victory for direct action!

4. Resistance to border controls in Greece

Migrants at the Amygdaleza detention camp in Greece fought back against border control on Saturday 11th August when they were told that the maximum amount of time they could be held there was to be extended from one year to eighteen months. Riot police were called in after mattresses were set on fire and stones were thrown at the guards, with at least ten officers injured in the clashes. Amidst the disorder at least ten migrants managed to escape the camp, although a further fifty were arrested.

The Amygdaleza detention centre has come under fire from rights groups due to the poor conditions and reports of police abuse. United Against Racism and Fascist Threat (KEERFA) revealed that guards had beaten Muslim detainees during prayers and several migrants were refused healthcare. KEERFA have condemned the death of an Afghan detainee at the camp after guards ignored a pulmonary infection which eventually killed him.

Greece is one of the main entry points into the European Union. Thousands of migrants and refugees enter the country every year trying to escape war-torn or impoverished countries. Amygdaleza is one of several detention centres set up since last year to assist in the forced repatriation of migrants caught crossing the border. These are people whose only crime is trying to find a better life for themselves and their families. They are fleeing wars and disasters often caused by the very countries that arrest and detain them.

Once we begin to break down the barriers between races and nationalities we begin to realise that we have a lot more in common with migrants than we do the bosses and politicians. We must unite across borders and races to combat the real enemy – capitalism and the state, in order to achieve a truly free society.

Irina was arrested on 2nd July 2012, so has already spent more than one year in prison without trial. She is accused of having taken part in an armed assault against a Nazi concert in the Moscow club ‘Barrikada’. She has been charged with three felonies, including “hooliganism, committed by a group and with a preliminary intent” and “involving minors in a felony hate crime”, as one of the persons arrested with her was 17 years old at the time of the arrest.

Irina was arrested just few days after her graduation from the Journalism Faculty of the Moscow State University. She needs medical care for her hand, as she was stabbed by Nazis during a fight in May 2011, but supporters are worried that she may not receive proper medical care whilst in prison.

During the remand court session of 27th June, Irina was strong and showed that the system is not about to crush her.  According to Moscow Anarchist Black Cross, whilst she is not in need of material or financial support at present, moral support is very much welcomed as a full year of remand prison is hard for anyone. As another blow, during the investigation it was discovered that she was betrayed by some of her former comrades.

You can write to Irina at the following address:

Please note that letters in English are seldom accepted in Russian prisons, so if you do not have a chance to write in Russian, just send photos and postcards.