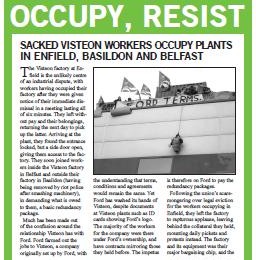 Also out this month: Organise! magazine no.72

The Visteon factory at Enfield is the unlikely centre of an industrial dispute, with workers having occupied their factory after they were given notice of their immediate dismissal in a meeting lasting all of six minutes. They left without pay and their belongings, returning the next day to pick up the latter. Arriving at the plant, they found the entrance locked, but a side door open, giving them access to the factory. They soon joined workers inside the Visteon factory in Belfast and outside their factory in Basildon (having being removed by riot police after smashing machinery), in demanding what is owed to them, a basic redundancy package.

Much has been made out of the confusion around the relationship Visteon has with Ford. Ford farmed out the jobs to Visteon, a company originally set up by Ford, with the understanding that terms, conditions and agreements would remain the same. Yet Ford has washed its hands of Visteon, despite documents at Visteon plants such as ID cards showing Ford’s logo. The majority of the workers for the company were there under Ford’s ownership, and have contracts mirroring those they held before. The impetus is therefore on Ford to pay the redundancy packages.

Following the union’s scaremongering over legal eviction for the workers occupying in Enfield, they left the factory to rapturous applause, leaving behind the collateral they held, mounting daily pickets and protests instead. The factory and its equipment was their major bargaining chip, and the union convincing the workers to abandon this has weakened their position. Not surprisingly, Visteon’s first offer following the end of the occupation amounted to just 16 weeks pay. The union support has been woeful, both in terms of presence and income; they visit rarely and when they’ve contacted workers, they haven’t passed along much information about negotiations. They have not even created a fund for the struggling workers, who are having to rely on donations from up and down the country.

The Enfield workers are now on a continuous picket outside the gates of the plant, at all hours of the day. They are being kept company by a support group, set up at a meeting at the plant, to aid those involved in as many ways as possible, whether collecting money, leafleting the local community or covering shifts throughout the day. Unaffiliated visitors have also been made welcome at any time. The Basildon workers face a similar situation, whilst the Belfast workers are standing strong in their occupation. Their morale was bolstered on the 17th April by a rally attended by hundreds and a march from Transport House to Belfast City Hall, finding sympathy from 30 bus drivers who parked their vehicles in the centre of the city at lunch to support them.

The tactic of going into occupation has been contagious recently, and most importantly, it- has been successful. From Windows Republic in the US, to Prisme Packaging, Scotland and Waterford Crystal in Ireland, workers have found the only way to receive a decent payoff, and to be treated with respect by bosses, has been to take militant action. Aside from the Visteon occupations and pickets, there are two schools being occupied in Glasgow at risk of closure, and electronics workers at FCI Microconections in France have just saved their jobs through occupation. In this recession, fighting for pay and even the privilege to work is vital, and a conscious working class body in each workplace is necessary. Regardless of where you are in the country, if you fight collectively, you can win.

If you would like to support the picket, you can put your name down on the rota for a 4 hour shift here: http://doodle.com/7tgwd2akiyeas8id

Or if you’d prefer to donate money, cheques can be sent to HSG (Haringay Solidarity Group) at:
PO Box 2474, London, N8.

To find out more ways you can support the occupation. or to find articles, leaflets, interviews, video documentaries and more on the Visteon workers’ struggle go to
http://www.visteonoccupation.wordpress.com